Charlie Stayt’s brutal shutdown of Nadhim Zahawi was magnificent (more of this sort of thing, please)

It’s a common complaint that TV and radio interviewers aren’t ruthless enough with politicians, and when they are ruthless the politicians simply stop turning up.

So we’ll watch with interest the next time newly-installed education secretary Nadhim Zahawi turns up on BBC Breakfast after this fabulously straight-talking intervention by presenter Charlie Stayt.

Charlie Stayt: ‘I’m going to jump in because I don’t really understand what you’re saying if I’m honest with you’

“I’ll jump in, as I really don’t understand what you’re saying.”

Everything about it – from Stayt’s interruption to Zahawi’s response – is simply perfect.

Here’s a longer clip and – not unlike Dominic Raab’s struggle with the meaning of ‘misogyny’ on the same programme yesterday – it just gets better and better.

New Education Secretary @nadhimzahawi is stumbling and floundering under intense questioning by Charlie Stayt on #BBCBreakfast. This is what happens when you challenge this governments rhetoric and hold them to account.

Not only did Charlie Stayt not understand what Zahawi was saying, Zahawi himself didn't understand what he was saying. He's making Gavin Williamson look like a genius. He's an Education Secretary who can't string a sentence together – what an example to hold up to students! https://t.co/BjWzAClxi3

Charlie Stayt to get a medal from the RNLI for saving Nadhim Zahawi from drowning in his own words. https://t.co/9qbOh76Fca

Nadhim Zahawi the new Secretary of State for Education has just achieved the impossible.

He’s just made it look like Gavin Williamson knew what he was doing.#bbcbreakfast #nadhimzahawi #bbcnews pic.twitter.com/OKHI2SsKOb

And @PeteTwynamUK did a considerable public service by doing this.

Someone suggested that Nadhim Zahawi's remarkable interview with Charlie Stayt this morning might make more sense if it was transcribed. And lo! The veil of gibberish was lifted… pic.twitter.com/yovRL1CYCy 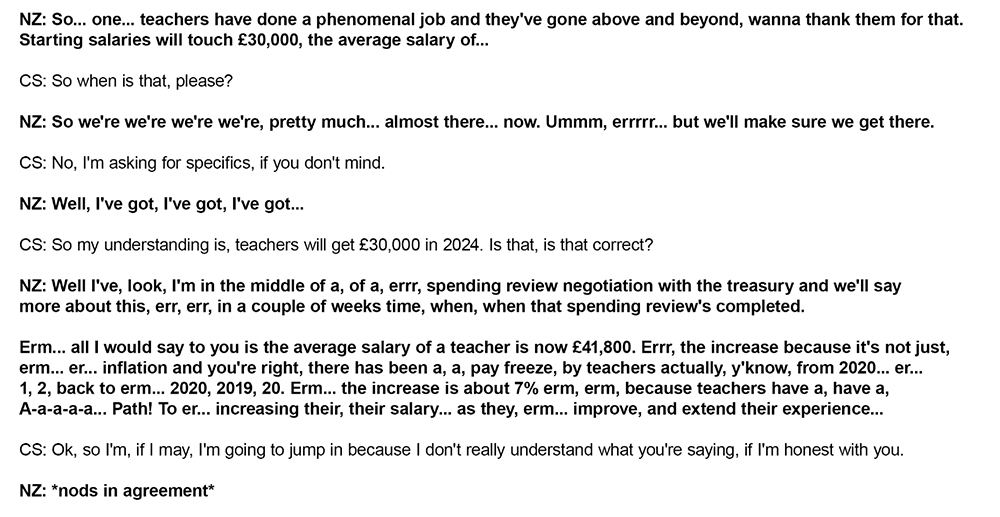 Best 5 seconds of breakfast TV since Piers Morgan walked off.