Jacob Rees-Mogg has really settled into his job as Secretary of State for Unicorns and Sunlit Uplands, or Minister of State for Brexit Opportunities and Government Efficiency, as it’s known to people who are better at keeping a straight face than I am.

Why do we need a Brexit benefits minister?
Aka. Jacob Rees Mogg.
If as promised the benefits would be amazing, surely they would be self evident.
We shouldn't need someone to point them out or even worse, have to search them out.
Just a thought.

Just six short years after he travelled the country and haunted every news studio, telling the UK of the wonderful benefits that leaving the EU would bring them, he’s out there with his sleeves rolled up – metaphorically – trying to find one that exists.

Last week, he asked readers of *checks notes* The Sun to share the benefits they have identified. 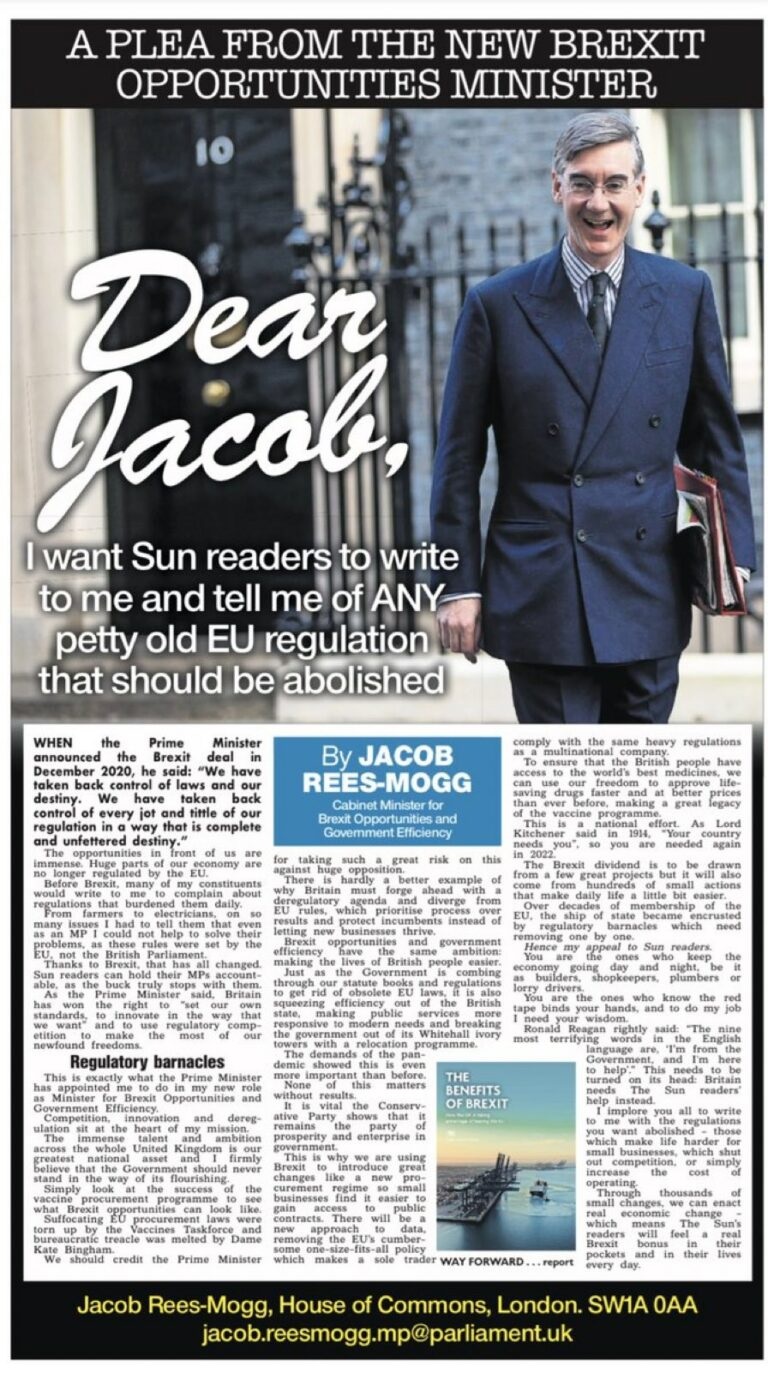 Of course, that resulted in a Twitter free for all.

1st day on the job as new Minister for Brexit Opportunities

And Jacob-Rees Mogg has opted to delegate his entire role

Jacob Rees-Mogg turning to readers of The Sun to write to him with examples of EU laws they would like to see repealed is simultaneously one of the funniest and saddest things I’ve seen in a while. Can you imagine opening that mailbag?

EXCLUSIVE: Live picture of Johnson wheeling Sun readers to Jacob Rees-Mogg's palace, where they will be set to work mining for Brexit benefits. pic.twitter.com/QfqWgBZIcv

But things must be looking up, and not just because people are rolling their eyes to heaven, since Rees-Mogg has vowed to reveal the benefits soon – and not in 50 years, like he said after the referendum.

The Express splash got quite a bit of attention.

one for the archives pic.twitter.com/cunE3h5HrJ

This is delusional. Brexit has cost the UK £billions in lost trade, investment and growth.

It's compounded the Tory cost of living crisis by increasing costs, destroying jobs and squeezing incomes – and it's stripped people's rights away. There are no wins – let alone big ones. pic.twitter.com/tzMEPQ7FT3

It occurs to me that this is going to become like the football, isn’t it? In 2046, Brexiteers will be singing “30 years of hurt, never stopped me dreaming” and “Brexit’s coming home.” pic.twitter.com/afEpskIuoi

Do you think Express readers ever, just quietly, think to themselves "I wonder if my paper is lying to me"? pic.twitter.com/4u1nhFIqtY

After the biggest peacetime annual fall in British exports – down £20 billion to the EU in 2021 compared to pre-pandemic, pre Brexit 2019 – the Express and Jacob Rees-Mogg declare “Brexit will transform Britain” They’re right. It’s an intensifying disaster. pic.twitter.com/FRmu1FBq80