Boris Johnson was typically evasive when he was asked whether he did or didn’t attend Downing Street’s now notorious ‘bring your own booze’ gathering at the height of lockdown in May 2020.

As you may have seen already, he said he’d rather wait for the civil servant-led inquiry rather than, you know, actually answer the question. Smirking away while he did it, obviously.

Sky News understands Boris Johnson and his wife Carrie were among around 40 people to attend a drinks event in the Downing Street garden during the UK's first national #COVID19 lockdown.

And no-one skewered his characteristic BS better than Rosie Holt in this video of a Tory MP who doesn’t know whether she attended the Downing Street party or not. It’s just gone wildly viral because, well, watch.

And just when you were thinking it couldn’t possibly get any better, it caught the attention of former UKIP leader Henry Bolton – you remember – who said this. 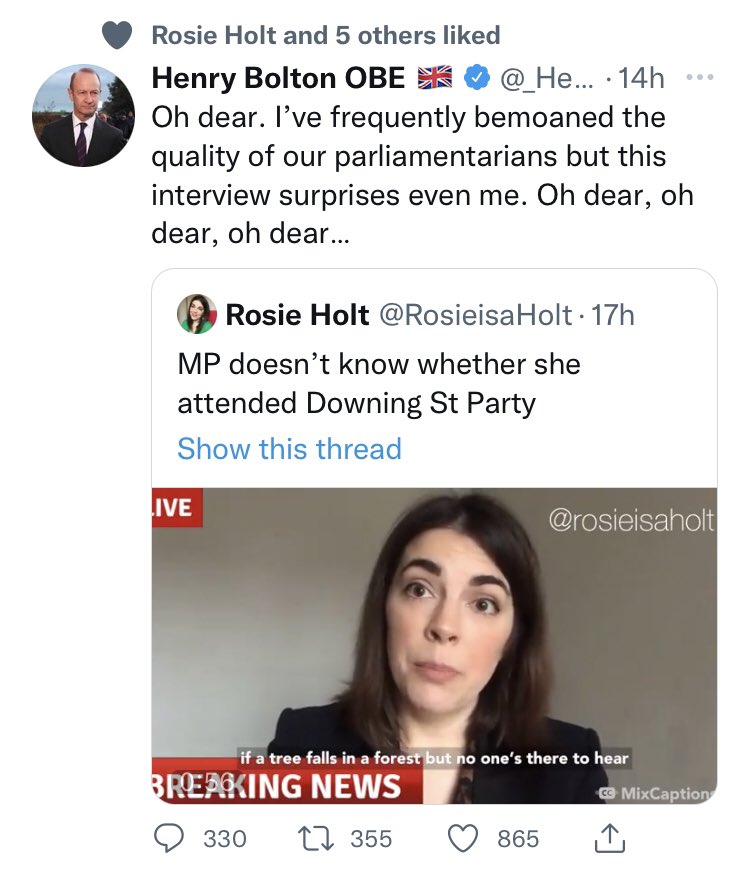 Although at the risk of being fair to Bolton, he wasn’t the only person to make the mistake because it was just so good.

@RosieisaHolt hits the nail on the head.

It sounds utterly ludicrous, but it's so near the truth that you can't tell what's satire anymore.

Well, the dividing line between reality and satire can be harder to spot these days. Just ask Michael Fabricant.

And you wonder why so many people think the best parody accounts on here are real… https://t.co/3PAN2xLw7e

And in the unlikely event you don’t already, follow @RosieisaHolt here!

Thank you to those who've RT'd my vids, and hello to new followers… here is a thread of some of my videos because why not💁‍♀️https://t.co/eKh2dFOwMb

Bit eh, nervous to share my kofi link as some people are a leeetle cross, but hey! If tipping online satirists ( 😅) is your thing, you can do so here ( if you want to, if you don't this is FINE xx ) https://t.co/Zi3YYJwNuj