It’s almost Thanksgiving in the USA – a sort of harvest festival combined with an early Christmas dinner that’s one of the biggest days of the year.

US citizens are already making their plans and the First Family is no different. The Bidens will be celebrating on Nantucket in Massachusetts, as they have every year since 1975.

The Republican Senator for Texas, Ted Cruz, reminded people that the island is probably most well known for providing the setting for a NSFW limerick. We’ll leave you to do the googling on that one. 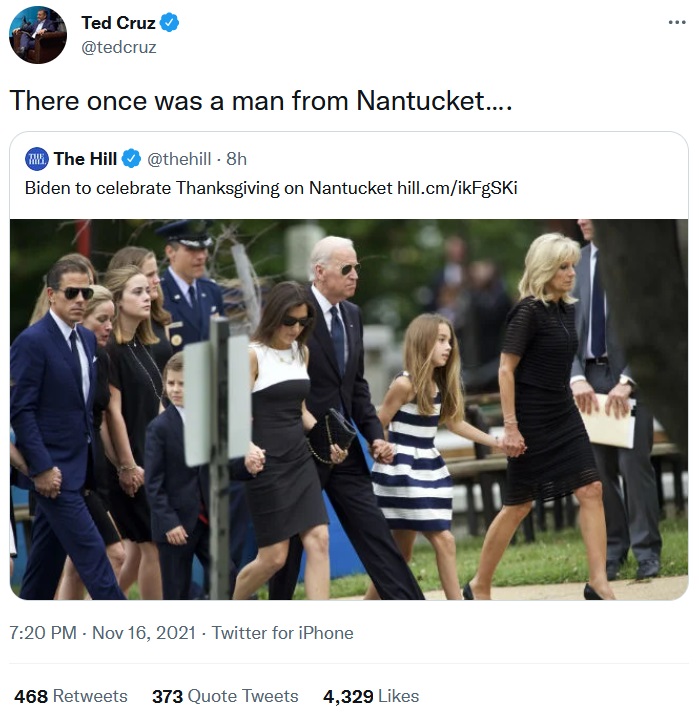 If anybody should be joking about politicians taking a trip, it’s definitely not Mr Cruz, who earned widespread condemnation and mockery for fleeing to Cancun during freezing storms and blackouts in Texas.

Ted Cruz blaming the women in his life feels very on brand pic.twitter.com/zDfpEKYgWj

Inevitably, the tweet got him owned all the way to …well, Cancun. There were a lot of limericks.

Ted Cruz criticizes Biden for going to Nantucket for Thanksgiving

Big Turd has no shame

Man of the people, Ted Cruz who once flew to the Ritz Carlton in Mexico while his constituents literally froze to death https://t.co/E7ojAhvmP4

Is there anything that doesn’t annoy Ted Cruz? pic.twitter.com/uqFVOp1cwu

There once was a man named Ted Cruz
Who crawled around licking Trump’s shoes
He’ll go back on his word
And pick on Big Bird
Because he’s a pathetic traitorous cooze #TurdCruz https://t.co/fyU6n24KaC

Senator, are you in favor of lowering the eligible voting age? I only ask because it now appears that you spend the majority of your time trying to craft zingers for 11 year old boys to laugh and snicker at. https://t.co/HBfbqK8aoX

Cancun Cruz probably thinks the Bidens should celebrate Thanksgiving in Cancun instead of Nantucket pic.twitter.com/qF4ialmb6b

This is a US Senator who attended Ivy League schools and whose life goal is to run for President of the United States.

So yeah it makes sense. https://t.co/lAZHJX6jmG

…who didn’t fly to Cancún while his people kicked the bucket. pic.twitter.com/GIfBnfjUi1

There once was a Republican goon
When it snowed he skipped off to Cancun
He kept smiling smugly
As Trump called his wife ugly
He'll be President when I land on the moon https://t.co/sFcVOqRalB

There once was a small “man” named Ted.
Who in a crisis to Mexico fled.
He said with a smirk
Because he’s a terrible jerk
“Don’t blame me, blame my daughters instead”. pic.twitter.com/75AHukc0WC

He got tired of listening to Ted Cruz and said, “fuck it.” He went to the beach having signed a big law and said, “all the Trump-loving Republicans can suck it.” https://t.co/dBy0EHwNxE

Lawyer and journalist, Imani Gandy pointed out another way Cruz’s joke had backfired.

Does Ted Cruz know what the man from Nantucket limerick is about?

Because he basically tweeted that Joe Biden has big dick energy