To the Times, where columnist Clare Foges has been highlighting the upside to shortages of fuel, shortages of food and all that other day-to-day stuff that suddenly seems to be in short supply.

But what was that upside, we hear at least one of you asking right now. Foges, former speechwriter to David Cameron, suggested that many people ‘secretly enjoy the chance to show some Blitz spirit’. 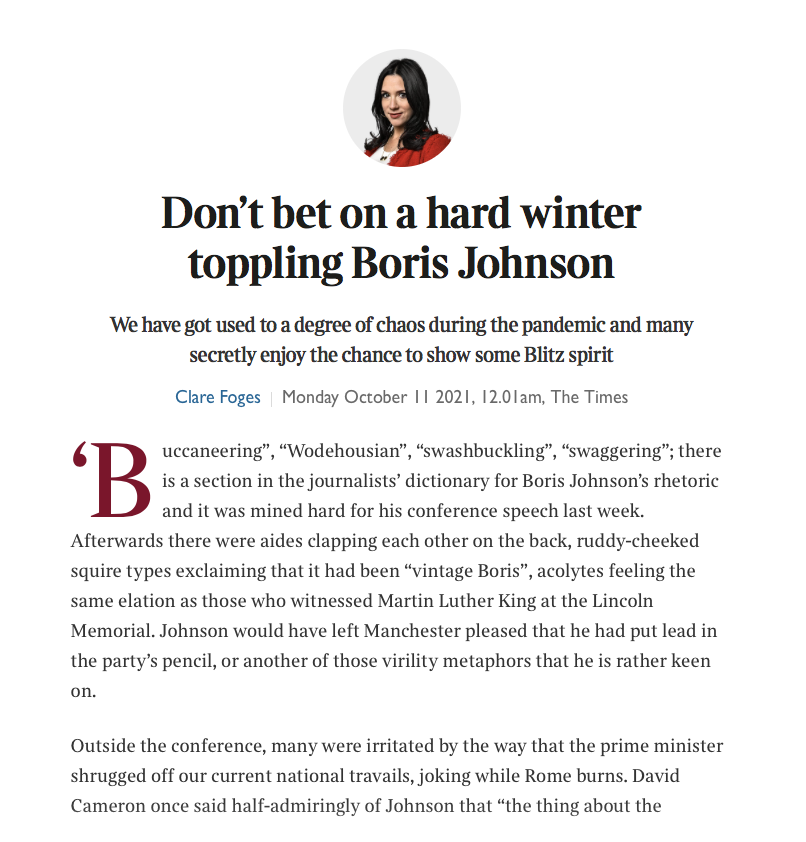 And here’s just a snippet of what she had to say (courtesy of @TobyonTV over on Twitter). 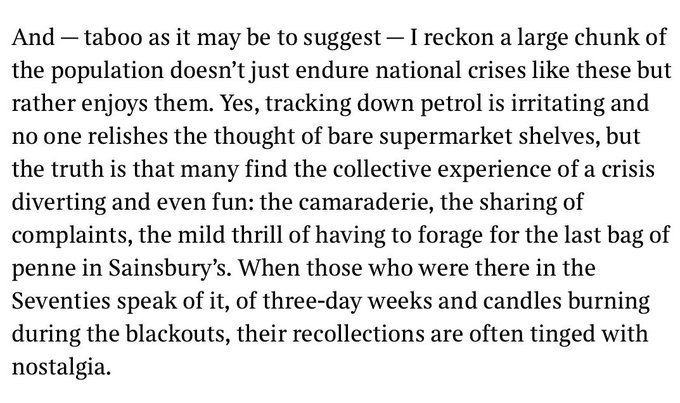 It generated no shortage of attention as you might imagine, and here are our favourite things people said in response.

Blitz spirit? Many get uppity at the thought of putting on a mask. pic.twitter.com/KPIcHCyU9q

who doesn't secretly enjoy the camaraderie of searching for food & having no heating pic.twitter.com/ASHEEAuZwK

2016: Brexit will improve your lives
2021: Look we all secretly love being bombed- pic.twitter.com/oQ2d3KLqUg

'Many secretly enjoy the chance to show some Blitz spirit'

Having financial struggles in your life isn't some kind of fun adventure or kooky thought experiment. Posh weirdos. It's not cosplay or a kink. As a great man once said: 'If you called your dad he could stop it all yeah' https://t.co/BiCb56YrRk

This creepy-ass Blitz fetish that saturates Britain was programmed in: if you were a child between the 50s and 90s, think of the sitcoms, dramas, movies, songs – and even playground games – about war that we soaked up. The UK is suffering from a mass cultural personality disorder

"Many secretly enjoy the chance to show some Blitz spirit."

Rent a flat above a shop
Cut your hair and get a job
Smoke some fags and play some pool
Pretend you never went to school pic.twitter.com/23JajB04hk

The Luftwaffle continues. More blitz spirit bullshit around Brexit. The UK has turned war and nostalgia into the creepiest fetish imaginable pic.twitter.com/VWif8tBNl9

Actually having learned a lot about the war over the years, I decided long ago that at not point did I ever want a chance to display 'blitz spirit'.

In-fact, unashamedly, I want my life to comfortable, safe, relatively easy and free of want. Is it just me?

I find it hard to believe that the line in the leader of an article in today’s Times about what could potentially be a very difficult winter, reading “many secretly enjoy the chance to show some Blitz spirit” was written or reviewed by anyone who’s ever been hard up in any way.

I’m always proudest of our ballsy Blitz spirit champions when I see them in a snivelling, apoplectic rage because they have to wear a face mask that might save lives. That’s the real grit of Dunkirk right there.

Try a gas mask (like your grandparents), you war-fetishising freaks

at last, a chance to enjoy some Blitz spirit pic.twitter.com/yAW6D9zmIi

Sometimes the very best takedowns are also the simplest