Former junior minister at the Department of Health and Social Care, Nadine Dorries, has been appointed Secretary of State for Digital, Culture, Media and Sport in the cabinet reshuffle.

The MP, so prone to making ill-informed claims that James O’Brien felt the need to create the ‘Nadine Dorries Award for Weapons-grade Brexit Ignorance’, has a long history of gaffes, including –

Claiming the Tories had created twice as many jobs in Hartlepool – or Harlepool, in Dorriesworld – as the population of Hartlepool. 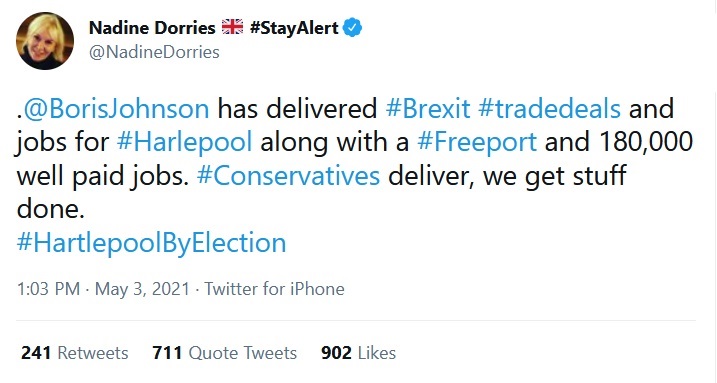 Complaining that Brexit removed the UK’s voice in the European Parliament.

Anyway here’s brexiter Nadine Dorries complaining that we won’t have any MEPs after Brexit pic.twitter.com/GmueMTK2b9

When she thought she had a gotcha for people paying attention to the many damning revelations shared by Dominic Cummings after his expulsion from the heart of government. 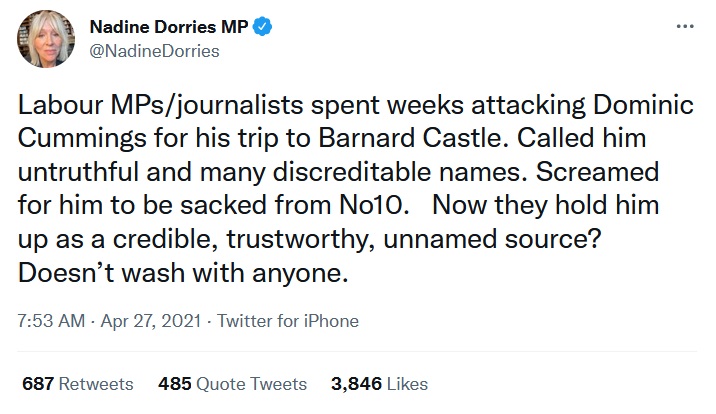 Because it would be completely ridiculous to doubt the claims for which he had screenshots, whilst believing he drove to Barnard Castle to test his eyesight. Oh!

At least we know she’ll be even-handed in her new role when she has to decide the future of the BBC. Oh! 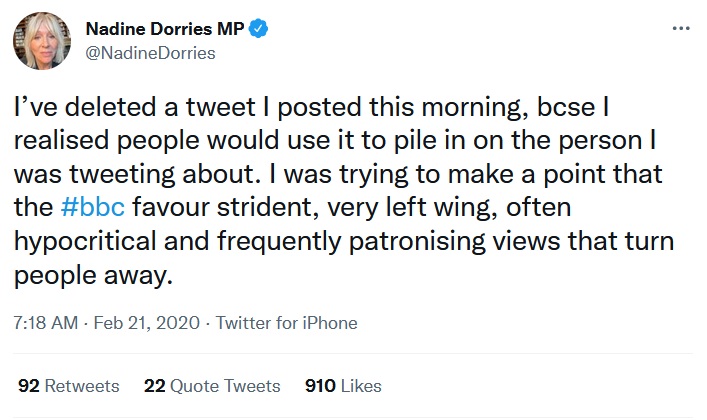 It could be worse – she could think ‘left-wing snowflakes’ have removed Christ from Christmas. Oh! 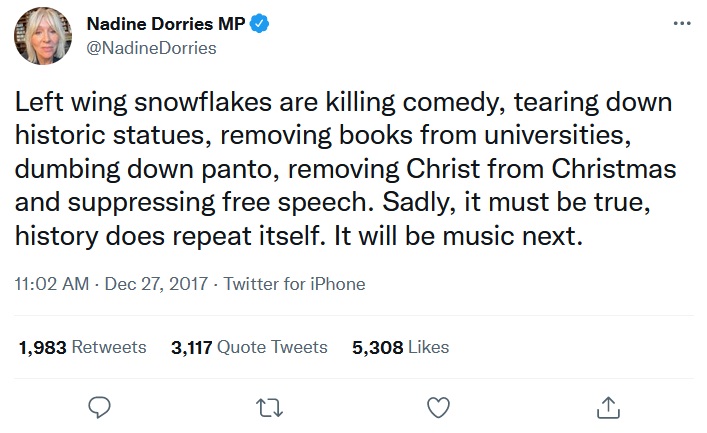 It's appalling, obviously, and conclusive evidence that Johnson holds the Culture department in complete contempt, but Nadine Dorries becoming Secretary of State is straight up hilarious.

The closest Nadine Dorries ever gets to culture is if she's eating a pot of fucking yoghurt.

Nadine Dorries, who thinks lefties are dumbing down *panto* has just been made Culture Secretary pic.twitter.com/a1HhF4Z6Vc

Has the UK been hacked? https://t.co/Po75oHoCTA

When you realise that Nadine Dorries has just been appointed Culture Secretary by a man whose favourite film is Vince Vaughan's Dodgeball it all makes sense.

Nadine Dorries is in the cabinet. The next time anyone in this government mentions "meritocracy" remind them they promoted the most intellectually vapid MP of the modern era.

It's difficult to imagine a less talented or qualified cabinet.

Honestly, the Octonauts would be a fundamentally better Government. #CaptainBarnacles4PM https://t.co/pHblCcD9iv

Hahaha @NadineDorries new Culture Sec… great to have someone who has written more books than they have read.

Feeling pretty proud that I've managed to prove wrong all those who said we had the worst possible Cabinet.#Reshuffle