We were already a big fan of Sam Neill and now we’ve got just one more reason to like him after he got the hump with Lego over the packaging for this Jurassic Park set which he was signing for charity.

Neill, who plays Dr Alan Grant in the movie franchise, went viral after he shared his ‘fury’ on Twitter. Here’s what he had to say.

OUTRAGE! So signing this ⁦@LEGO_Group⁩ box for charity today. And I see beside each model a shot of the actor. Cool. Jeff ! Laura! But instead beside Alan Grant figure there’s a … what!? No It IS ! A TOILET! Insulting? Hilarious? Explain! Amends! pic.twitter.com/Y3CHo9eqxy

Here it is in close-up. 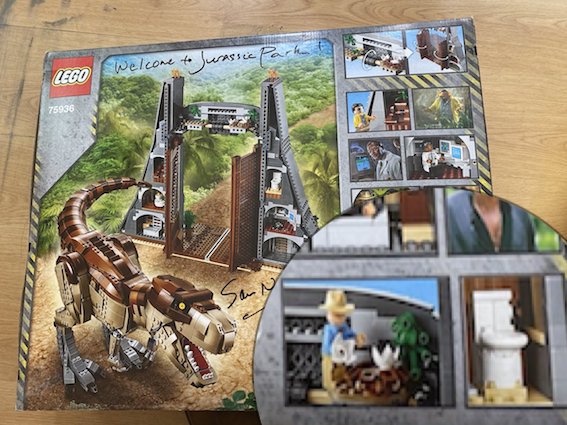 And it wasn’t all he had to say about it.

@LEGO_Group . Okay #LEGO . This is not a little insulting. Look carefully at the right of the box. Beside each model , a shot of the character . Beside #AlanGrant– a what ? A TOILET !? Is this a commentary on my performance ? What were you thinking!? Hilarious pic.twitter.com/CJ4SzF9w7W

It’s not the first time he’s expressed concern about spin-offs from the movie series. Here he is again on Twitter earlier this month.

Got sent alarming pic of model Alan Grant with REMOVABLE head and hands ! ( And generous cricket protector ) . Is this for would be young murderers to play with ? Regardless – could the manufacturer send some, my kids want them?! Only slightly worried. pic.twitter.com/tVbqSypiHv

Maybe he can use that flare to set fire to the Lego box.

Neill, if you didn’t already know, will be reunited with his former co-stars in the next instalment, Jurassic World: Dominion, which is out next summer.