The three players who missed penalties in England’s Euro 2020 final defeat by Italy have been subjected to vile racist abuse on social media.

Jadon Sancho, Marcus Rashford and Bukayo Saka all missed penalties in the 3-2 shootout defeat and the racist abuse has been condemned by England manager Gareth Southgate and the Football Association.

Home Secretary Priti Patel also condemned the sickening abuse and had this to say about it on Twitter. 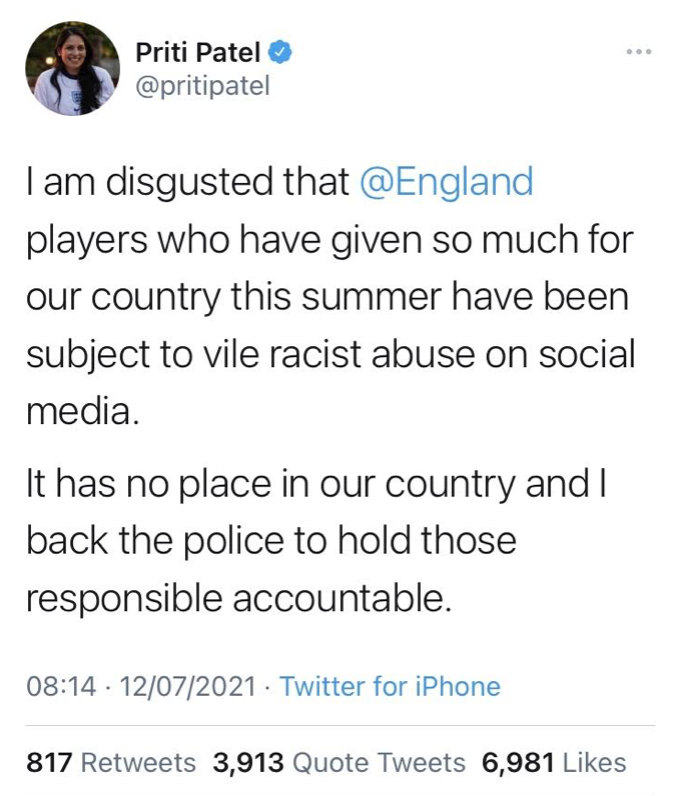 Which is of course entirely right.

Except coming from Priti Patel, who previously said England fans had the right to boo England’s players for the ‘gesture politics’ of taking the knee, well, some people had thoughts.

And these 13 people put it best.

If you’d have listened to them you would have realised that this is why they were taking the knee. Instead you criticised them and provoked behaviour exactly like this.

You should be ashamed.

When you say it’s fine to boo players taking a stance against racism, when your policies pander to racists and incite race hate, you are very much part of the problem. https://t.co/Xl3Won7q9r

You lied about why our players take the knee and defended the racists who booed them. Give your head a wobble. https://t.co/3YvxMIeoFX

I’m disgusted that the fire I deliberately started in the kitchen has now reached the bedrooms. https://t.co/ZC02XSf2sN

You literally endorsed booing them. https://t.co/mpKz9i4kNL

Yeah, they should protest about it in some way…any ideas? https://t.co/sX3YL0o0zU

This is why they take the knee. And you endorsed to booing of it. https://t.co/3NsEeE4rg4

When you told fans that it’s ok to boo England players taking the knee, you blew the dog whistle. The dogs came. And you had basically given them a license. So you really don’t get to speak of disgust now. https://t.co/QG4SGCEt32

I'm disgusted that the people I said it was OK to jeer at have been subjected to abuse. https://t.co/tulnMlHCHZ