The anti-vax, anti-mask Brexiter and ‘proud Covidiot’ – what’s to like? – had this to say over on Twitter. 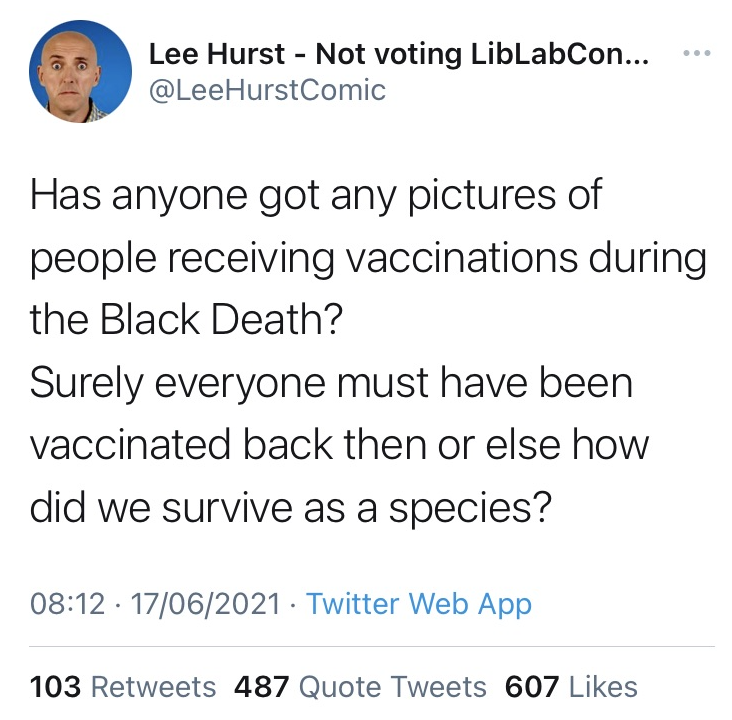 And the takedowns came thick and fast. Here are our favourites.

remember the good old days when 30-60 percent of us would die of the fucking plague pic.twitter.com/6QoP2IN6Ux

The Black Death killed at least 25 million Europeans – a third of the population of the continent. Devastation and misery wrecked on millions more. But despite that, contemporary reports did conclude that it was still a whole lot funnier than your tweets. https://t.co/fXExwLFFUT

Interesting history fact Lee. The word ‘quarantine’ originated from ‘quarantina’ meaning 40 days. This was the 40 day isolation ships practised as a public health measure during plague outbreaks. So, there were public health prevention measures, even then.

We survived as a species the same way as ever – the fittest survived. (Quite how your ancestors survived is anybody’s guess, maybe they were protected by the cave they lived in.)

The Great Fire of London went out without a proper Fire Service so why do we even bother having one now?

It killed an estimated 75-200 million people Lee.
Spread by fleas on rats.
Why don’t you do a scientific experiment and bring rats into your gaff, introduce the bubonic plague to them and see how you get on.
We’ll watch on zoom.
Melt. https://t.co/FIjGbZOF68

We survived as a species despite a quarter of humanity perishing in agony, then you read a Lee Hurst tweet and question whether that was, in fact, a good thing. pic.twitter.com/qFPkAV8GZk

I didn’t really have on my bingo card today – ‘washed-up comic from the 90s is in favour of the deaths of about a quarter of the world’s population,’ but here we are.

Never mind pictures of people receiving vaccinations during the Black Death. Has anybody got pictures of a paying audience at a Lee Hurst show?

Also, they tell us an asteroid wiped out the dinosaurs – and yet, here you are.

Just Lee Hurst advocating the death of 25 million people so he can grab a pint while regaling the locals in the Ram's Head with tales of how he used to call Rory McGrath names on TV 30 years ago. https://t.co/8jvuLMuuy2

This person had some numbers, just in case anyone still wasn’t convinced.

Ah, you see Lee, conservative estimates say that the Black Death (to which I assume you mean the outbreak of the 1340s-1350s) killed roughly 1/4 of the population of Europe. So that’d be 186 million dead today; or 17 million dead in the UK in the space of a year or so. https://t.co/LRyZVv5zkI

Half of Europeans survived, Lee. You’re right about that.

Think carefully now. What happened to the other half? https://t.co/NE1QPcq6ZL pic.twitter.com/NqJQl53u26