The disconcertingly named Euros 2020 are about to start, with teams currently playing warm-up friendlies to prepare for the contest.

Unfortunately, there has been a sour note to England’s fixtures, due to booing from some spectators when the players take a knee to highlight the fight against racism.

Blows my mind that Marcus Rashford, who literally ensured children are being fed in some of the poorest parts of the north east, is wearing captain’s armband, leading players in taking the knee, and paying supporters are still booing his act.

To be clear about the booing, tickets for these friendlies were restricted to members of the England supporters club. This is the hardcore fanbase who will also have many of the Euros tickets.

There was a lot of support for the team – and condemnation of the booing.

Proud of the England team for doing this. Taking the knee is about making a stand against racism and racial injustice.
Anti-racism is not something you should boo. Unless, of course, you’re a racist. https://t.co/x8Zeb65qID

Disgusting to hear so many supposed England fans loudly boo a team with many black players for taking the knee to protest racial inequality, then loudly cheer one of those black players when he scored.
Next time these idiots boo, the players should walk off.

But there’s always one – and it’s often this one. 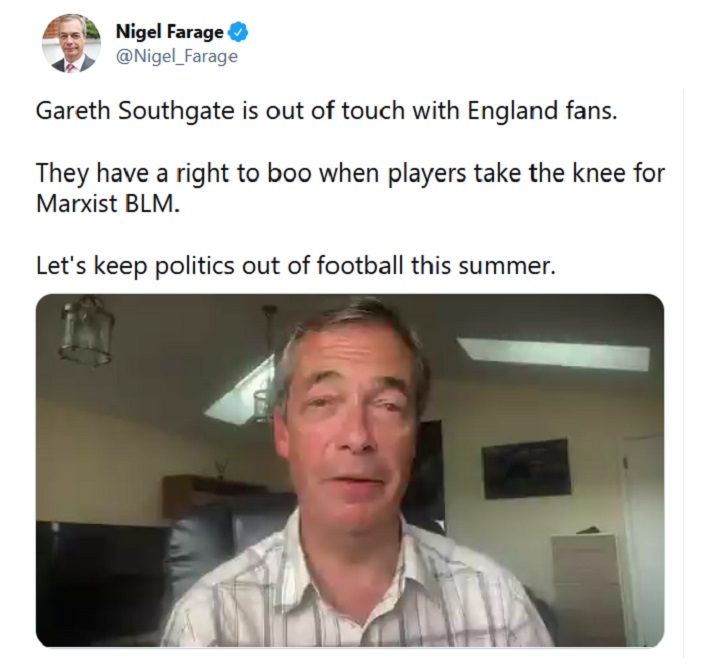 There was a certain irony about his position.

These reactions show exactly what tweeters thought of his hot takes.

The right: Freedom of expression is under attack, the left is trying to silence people they disagree with

Also the right: No, not THAT freedom of expression https://t.co/03EOFi070z

Might boo at the cenotaph during the 2 minute silence and say i'm not actually booing poppies i'm just booing against wars sure all the i'm just booing marxism crowd would be totally fine with that https://t.co/iU4jiRFD9x

Imagine being so smooth brained that you equate taking the knee with Marxism.

“Let’s keep politics out of football this summer”

– a politician, speaking about football, in the summer

Ah yes, I remember the section in Das Kapital about taking the knee

In conclusion, Farage’s former colleage at LBC, James O’Brien, had this observation.

Some of the highest paid twentysomethings on the planet are secretly Marxists but they accidentally blew their cover by expressing their opposition to racism before playing football. I think I've got it now.

Our 17 favourite takedowns of Trump’s trousers – not like that

This sketch brilliantly nails people’s strained relationship with the weather