The Central Intelligence Agency – CIA – has launched a diversity drive, which saw the release of a recruitment video, in which a woman of colour talks about her background and belonging to the agency.

Command your space. Mija, you are worth it."

Her words caused a storm of mockery, from the left and the right.

China and Russia love this. https://t.co/YGI5AEsO3w

The flood of condemnation included this collection of quotes, posted by Aisha Ahmad.

"I am a cisgender millennial"

"I have been diagnosed with generalized anxiety disorder"

I think it's safe to say the contemporary American left has failed.pic.twitter.com/ruUzWSeIur

The Republican Senator for Texas, Ted Cruz, spotted the tweet and weighed in with this peak-Ted-Cruz take. 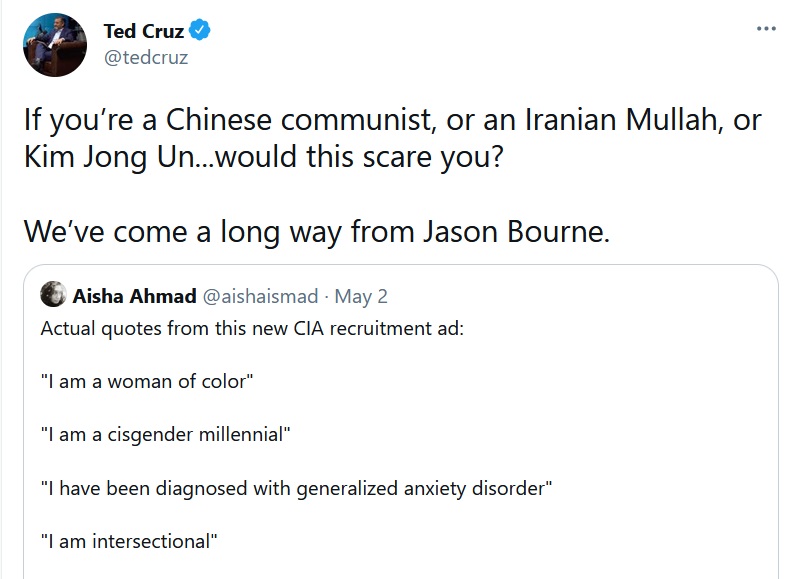 Whatever his intended point, it certainly seemed as though he’d missed the memo about Jason Bourne being fictional, and the takedowns rolled in.

Hey, moron: “Jason Bourne” is imaginary – like your conscience https://t.co/lAfPbP7RAl

You literally fled the country because your house was chilly.

Have a seat, Rambo.

1) Jason Bourne is a fictional character
2) The president you shilled for is Kim Jong Un’s best buddy and said they ‘fell in love’ https://t.co/0iRzm57Hqf

It's not just that Jason Bourne is a fictional character.

It's that the entire point of the Bourne movies is that Bourne is the product of a secret, off-the-books, unaccountable black ops organization, and that this is bad. https://t.co/S8SvryCunU

Jason Bourne is a fictional character who illegally assassinated people after being programmed to do so through torture. Also, guys who flee their state to go to Mexico during an ice storm because it’s mildly inconvenient should just take a seat on “toughness” #FatWolverine

Good point about how we've come a long way from movies.

Jason Bourne – a man with a legendary selective memory who spends all his time sneaking around the globe so he'll never have to do his job again. pic.twitter.com/kCW1bpGuwB

For the avoidance of doubt, KathleenFrances had this message for Senator Cruz.

Ted, Matt Damon is not really in the CIA, he did not really buy a zoo, fight in WWII, and has never been to Mars. https://t.co/lNMqOC8twn

from Matt Damon GIFs via Gfycat