The health minister took to Twitter after Dominic Cummings’ unprecedented attacks on his former boss, suggesting it ‘didn’t wash’ for people who had previously criticised Johnson’s erstwhile special adviser to now be taking him seriously. 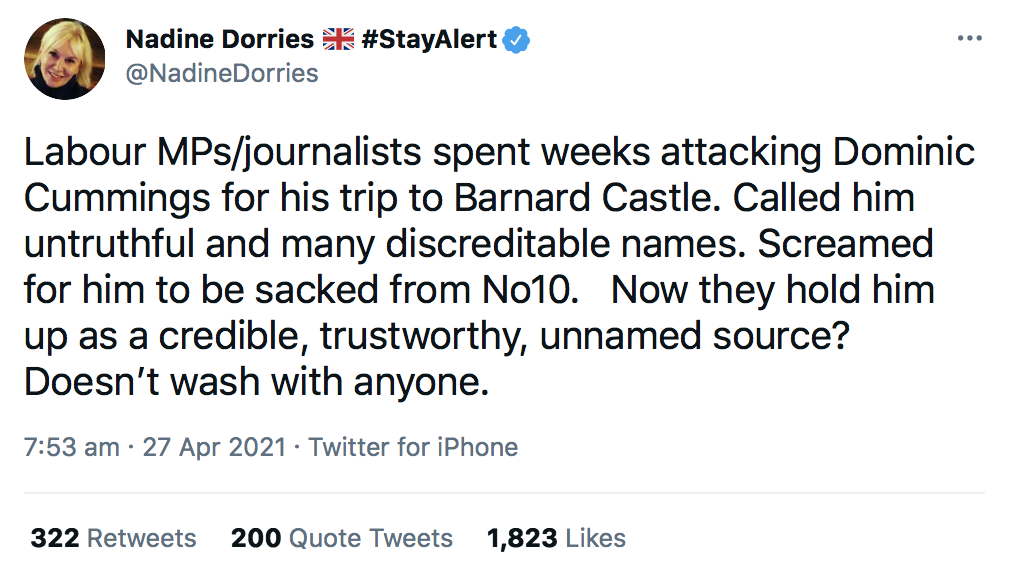 And these people said it best.

Tories spent weeks saying they believed Cummings when he said he strapped his kid in the back of his car to conduct an eye exam by flooring it down the A2. Called him truthful and a good father. Screamed for him to remain in post, and now they name him as a discredible source?? https://t.co/IAe0mcX0m1

You all must feel a bit silly having defended him so robustly then. https://t.co/vVSFdR367y

Tory ministers spent weeks defending Dominic Cummings for his trip to Barnard Castle. Now they criticise his integrity. One of them even tweeted a doctored video, so demonstrated her own lack of integrity. Doesn't wash with anyone. https://t.co/JqTom7auVf

The total loss or irony

Demonstrates exactly the calibre of politician we have in Govt right now https://t.co/WgDcVG3jVe

hang on is the minister saying we *weren't* supposed to believe he was taking an eye test now or https://t.co/jtleT9mmIm

Just to spell it out once more.

The problem with this is that during that same period Cabinet Ministers – most notably the Prime Minister himself – were telling us he was trustworthy. And a fit person to act as the most senior advisor to the Government. https://t.co/eD6WsFfitg

Not yet 9am and Nadine has already nailed today’s worst take pic.twitter.com/v64sqZILI6