If you were wondering what kind of a person Tory MP Andrew Rosindell is, and you almost certainly weren’t, he’s the kind of person who wants a statue of Ronald Reagan moved to Parliament Square.

Superb PMQs gobshitery from Andrew Rosindell (Con), who asks Johnson to back a plan to move a statute of Ronald Reagan to Parliament Square.

The Reagan statue is, of course, the main topic of conversation in the Romford Wetherspoons.

That should tell you everything you need to know, but there’s more – 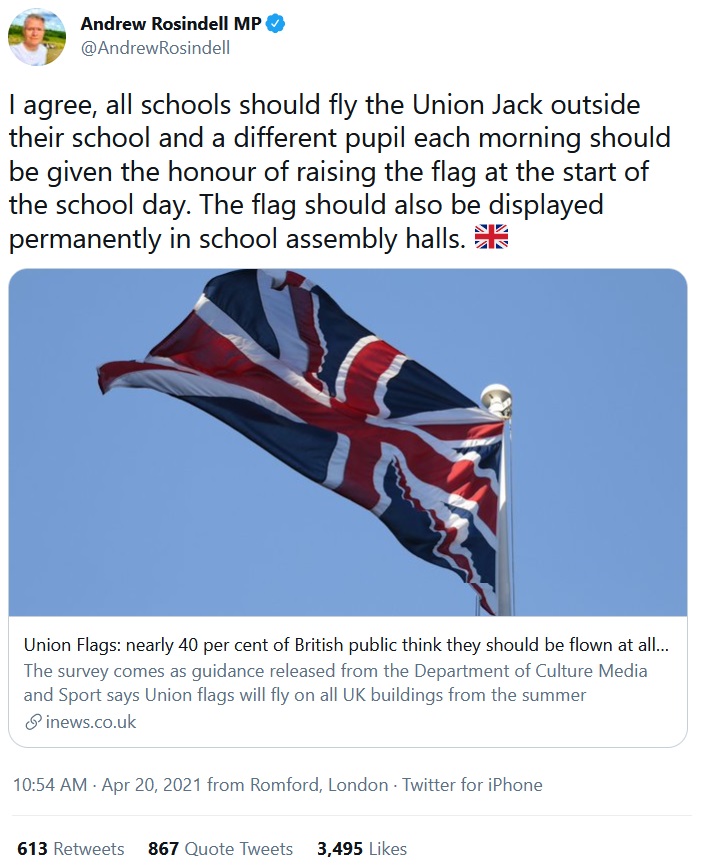 Apparently, Mr Rosindell has been watching how they do things in the US and decided it’s a good model. Twitter wasn’t convinced.

This will solve the problem of children forgetting what country they're in. https://t.co/fGfyUynLwx

It's not national pride if it's mandatory. https://t.co/DUORmeKIjw

Call yourself a patriot? Personally I won't be happy until there's a 40 foot high Churchill statue in front of school buildings and compulsory flag history as part of the GCSE curriculum https://t.co/XmZIowAwyf

They should also fire a gun every morning cleaned by a chosen student. https://t.co/m7zTQMHU4T pic.twitter.com/eU3GdGsZrR

What about holidays and weekends – does the Union Jack remain dishonoured and unraised?

And where’s your poppy? https://t.co/8EK1P2ClDL

“Ideally the school uniform should be made out of flags and all the teachers should be flags. School dinners to be replaced with flag dinners. A flag in ever flag room. No flag left behind. Flagschools so United Flagdom can flag the flaggiest flags of all flag flag flags flags.” https://t.co/OnenIphHub

As Dr. Rachel Clarke pointed out, there are other things that might need to move up the priority list.

Thousands of our school kids can’t afford to eat and your priority is feeding them flags??? https://t.co/nsFA0TpZEp

This is, presumably, why Marcus Rashford isn’t pushing for a union flag on every lunchbox.