England’s pubs were able to re-open on Monday, as long as they had an outdoor space in which to serve customers, and it seems that people took full advantage.

Hard to believe this is central London on a Monday night as opposed to some decadent festival.

Spontaneous cheering. People quite literally dancing in the streets- the liberation is palpable. pic.twitter.com/gxHeuKcood

When you’re desperate for a drink in a pub garden that you queue up to get in at just after midnight! 🍺

This was The Oak Inn earlier this morning 😳 pic.twitter.com/3OJBAVJ2Rl

someone just dropped a glass and the whole pub garden cheered. nature is healing.

One person who made it to their local was the London Mayoral candidate, Laurence Fox, who posted this. 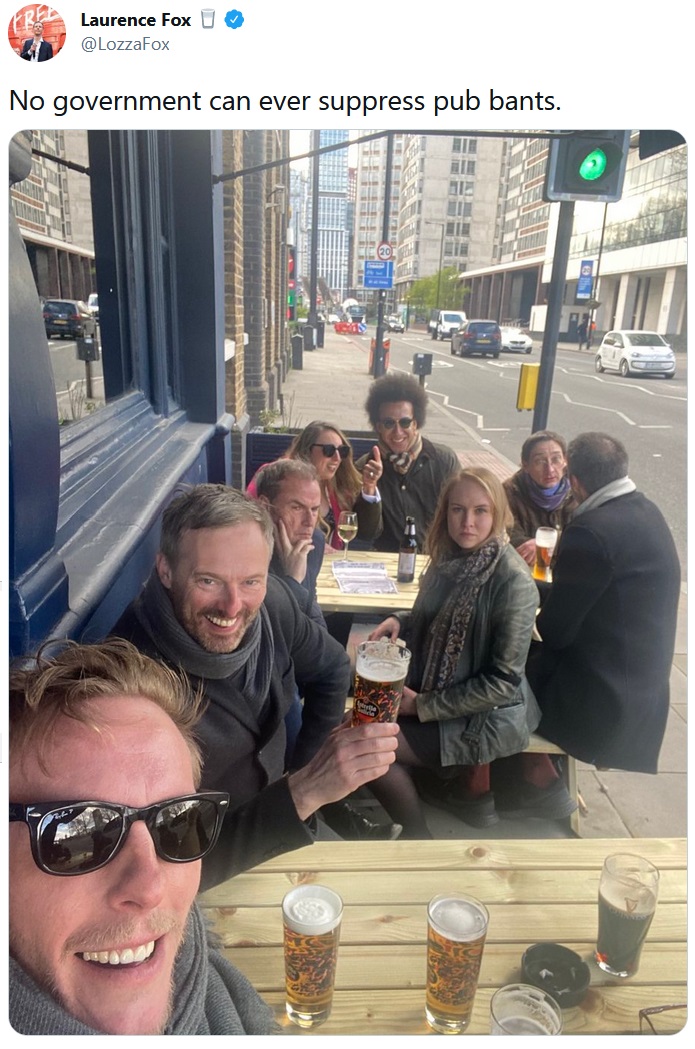 Nothing says the 'fuck the government' like attending an outdoor beer garden on the day they're legally permitted to open https://t.co/tLFfLv1wPm

Fucking hell imagine the “bants” at those tables. You’d be calling for another twelve month lockdown within twenty minutes. https://t.co/3xyb3g6Itu

Bookmark this tweet for those grey moments in your life, and know that you will never sink that low. pic.twitter.com/8AsPEozoTp

That description the sole preserve of the absolute *redacted word* pic.twitter.com/pI3ulGMSB2

My hand has been forced. pic.twitter.com/1nPRanPuP1

If Carlsberg did adverts for social distancing…

They can, actually. And they probably will, as soon as the May local elections are over, the political benefit of lifting lockdown has been reaped, and infections are on the rise again.

My dad always said: You don't learn a thing the 2nd time you get kicked by a horse. https://t.co/LdVbfIV406

oh look it's the archbishop of banterbury and his good friend banta claus https://t.co/Dy67awdZ0B

I’ve never been happier to be teetotal. https://t.co/JXsD2zsfee

Journalist, Michael Moran, had a theory.

I'm not convinced that any government has ever tried to suppress "pub bants" – but I suspect that after today any party that promised to do so would win in an absolute landslide pic.twitter.com/xG8tVZLQAc

The local elections could be about to get interesting.

🟨🟥 If elected, we will suppress pub bants. pic.twitter.com/6raH3VxSsu

These celebrity cut-outs have been keeping people company through lockdown