The timeshifted photo of this back garden went wildly viral because it perfectly captures the crazy weather we are having right now.

It was shared on Reddit by MlackBirror19 who said: ‘The weather in the Netherlands today.’ 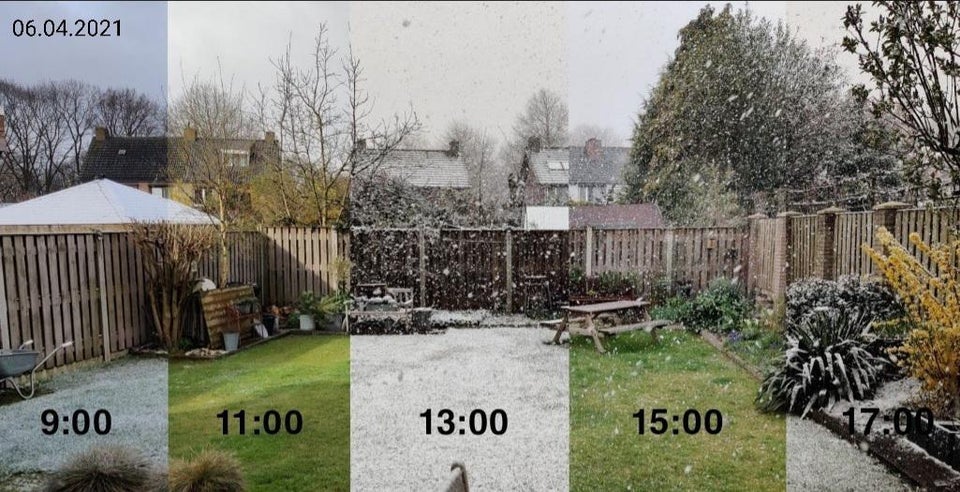 And not just in the Netherlands, it turns out.

‘And Austria. Today was a weird day.’ Napalm_B

‘France also. With all my trees in flower, bees must be like … This is not correct.’ disfunctionaltyper

‘Nice and sunny day in Scotland today. look forward to the next one in 100 years.’ badalki

And there was this impressive sounding context for anyone who wanted it.

‘Weather in April in Europe always is funny.

‘Reason is that in April in Europe it’s typical that there is high pressure on the Atlantic Ocean combined with low pressure on the continent. In between, the wind blows over a large area from a northerly direction.

‘The colder the air above, the more vertical air movements and the more chance of heavy rain. Especially when the air comes from the sea, and therefore contains a lot of moisture, such a cold upper air can result in hard rain with thunderstorms, grain hail and snow.

‘During such showers, the mercury can drop more than five degrees in a matter of minutes, sometimes even just above freezing. Between showers, the sky is often deep blue and the weather warms up quickly to around 10 degrees.Belgium here.

‘In our language we speak of “April grills” , and grills in the meaning of erratic.’
Coldasice_1982

The blistering takedown of this weight loss ‘advice’ is simply delicious