The multi-faceted Simon London – producer, presenter, journalist and content creator – has given us a welcome blast from the past with this classic typo from New York’s Post Journal.

Save this photo and when you think you’ve had a bad day look at my gift and think about their truly awful 24 hours… pic.twitter.com/5df1E508Y6 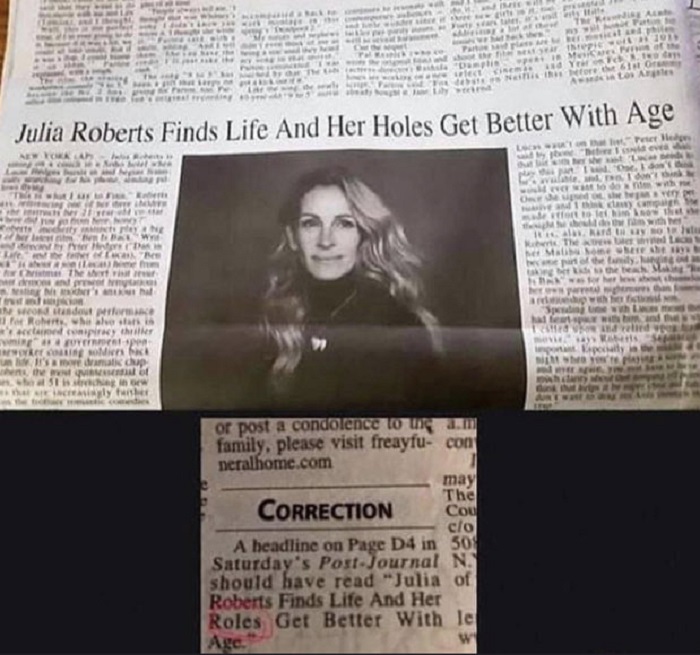 H isn’t even close to R on the keyboard, so that’s got to be a bit Freudian. Not very holesome.

The typo, and correction, brought joy to Twitter – even those who had seen it before.

I had completely forgotten about this, one of the all-time great typos, and have just spent a full minute shriek-laughing in glee https://t.co/W48D4EbDmH

Might just be my favourite typo and subsequent correction of all time . https://t.co/chsSUdrbpH

There but for the grace of St John Bosco, patron saint of editors everywhere…. 😳 https://t.co/YnVqKIvFk1

As a former sub-editor this makes me howl with pain and mirth in equal measure 😭 https://t.co/haUMiItXCe

That’s even worse than this. pic.twitter.com/xT9LlmIFVm

One of my all time faves. pic.twitter.com/ksrEQPTvlc

I popped this one over to Good Morning Britain.. pic.twitter.com/gF2BrOiGJn

I still giggle at this one pic.twitter.com/d9oSRL4Vy7

We hope they didn’t suffer a job blow.