It’s the first full day of Joe Biden’s presidency and Republican presidential wannabe Ted Cruz is already out there hitting him with his best shots.

Except instead of laying a glove on Biden, Cruz succeeded only in punching himself squarely in the face when he took to Twitter to criticise Biden’s decision to rejoin the Paris climate change agreement. 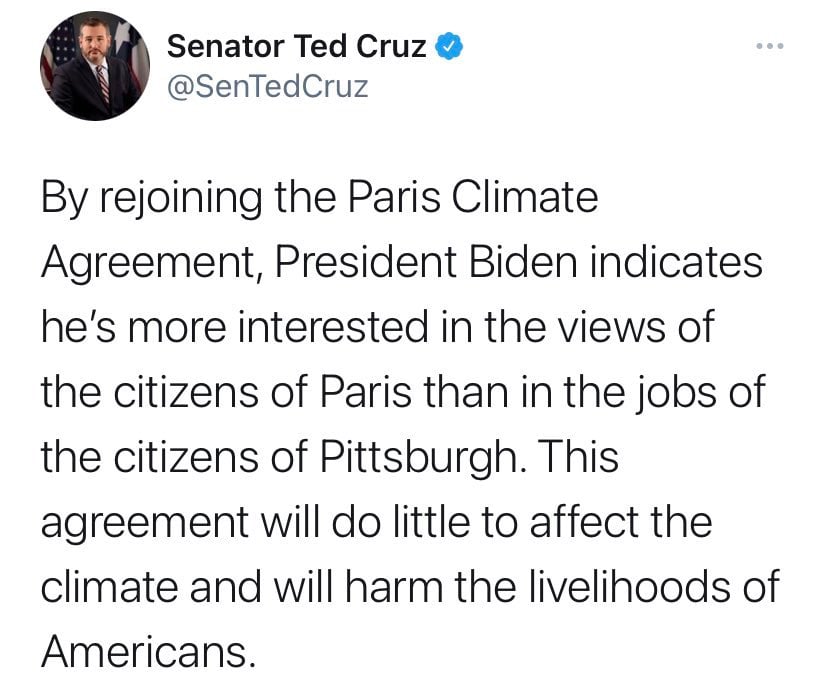 That’s right. Ted Cruz really did say the Paris agreement was about protecting the citizens of Paris, rather than being the capital city where the agreement was reached.

And it prompted no end of mockery as you might imagine. These 6 responses say it best.

Nice tweet Sen. Cruz! Quick question: do you also believe the Geneva Convention was about the views of the citizens of Geneva?

Asking for everyone who believes US Senators should be competent and not undermine our elections to incite insurrection against the United States https://t.co/mMf8iDo72G

You DO know that it’s only called the Paris Agreement because that’s where the meeting took place, right? It’s not actually a deal with “the citizens of Paris.” You know that…right? https://t.co/TiPILgEnJ5

Can’t believe The Treaty of Versailles only brought peace to the citizens of Versailles and everyone else had to carry on fighting in World War 1. https://t.co/r0N4nN2Qmc

Holy, I know more about the Paris Climate Agreement than you do, and you're a senator and I wrote MINIONS. https://t.co/C98Tl4e2fx

After voting to disenfranchise the entire commonwealth of Pennsylvania based on lies and conspiracy theories, Cruz expresses concern for the citizens of Pittsburgh. https://t.co/YQvBrV9PT9

Can't believe they only let people who live in London take part in the 2012 London Olympics. https://t.co/QxbThyBHS3

There was another theory, that Cruz knows exactly what the Paris agreement was about – he just thinks his followers don’t.

Here’s another one- Cruz knows the Paris agreement isn’t about the citizens of Paris. He just thinks we don’t. Bad faith from a bad actor. https://t.co/0MmpI4vHQD

But if that was the idea, it’s fair to say it backfired.

And just in case you’re still in any doubt Ted …

Sir, the Paris Climate Agreement is not about … Parishttps://t.co/KUdRXZOQap