Monday evening will see the first head-to-head debate between Liz Truss and Rishi Sunak, the sentient-barrel scrapings of Boris Johnson’s government, who are currently having a public slanging match to win his job.

Ever hungry for anything she believes to be positive publicity, the Foreign Secretary shared a Mail article about her latest campaign pledge – to send more people to Rwanda. 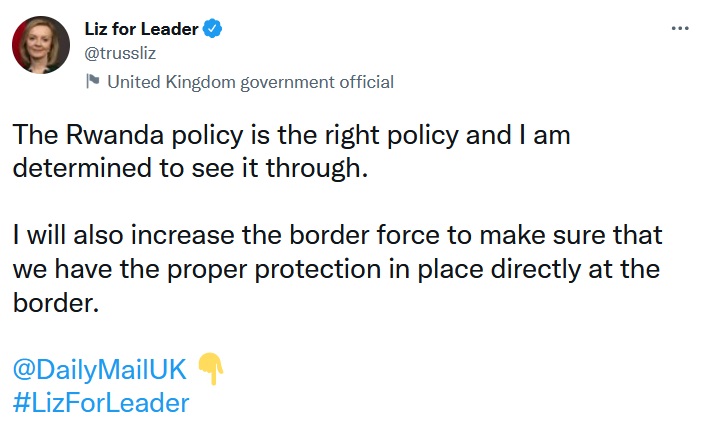 Coincidentally, the judicial review to determine whether the government’s flagship policy of deporting asylum seekers to Rwanda is actually legal is set to begin on September 5th – the day the new PM takes office.

Neither the Mail nor Liz Truss covered themselves in glory with that front page, and the comments reflected it rather well – occasionally veering into NSFW territory.

marshalling the spirit of pro- Mosley Mail in 1930s; hard to know which sinks lower – this rag or Truss pic.twitter.com/akmwcmzCje

Instead of tackling criminal trafficking gangs they are just ramping up rhetoric against refugees. Britain is better than this

Days like this I feel ashamed to be British. Yet I must be a better Briton than Liz Truss & those who publish these nasty headlines. What about Ukrainians? This evil racism will have a lasting effect on generations to come. I’m just thankful I have my platform & GMB to raise it. pic.twitter.com/0loaaPDMMx

This could quite easily have been the front of a National Front flyer from the 70s. I’d like to see Truss and her supporters asked to disavow it. pic.twitter.com/zQh3jyLigT

BNP Tory and broken shop mannequin, Truss, obviously hasn’t spoken to Rwanda. They’ll only take 200 people, at a cost of £120 million to the tax payer.

I’d genuinely prefer a wild badger in a suit as Prime Minister. pic.twitter.com/AaM2fu1lHV

I wonder what 16 year old Lib Dem Truss would think if you'd showed her this from her future. pic.twitter.com/x3xYu38Mvm

Remember that saying that politicians "campaign in poetry, and govern in prose"?

I wonder what happened to that? pic.twitter.com/k4ihJquz29

Both candidates to be PM:
I would simply be more of a cunt to people fleeing persecution and war pic.twitter.com/HS9dVqVLsC

There's a view common among journalists that pointing out the Daily Mail's support for Hitler and Mosley in the 30s is somehow unfair or naive. It is neither of those things. The Mail today is very much the same newspaper. https://t.co/BjjiuYaHV6

I see the UK is having another normal, not-at-all-alarming-for-human-rights one pic.twitter.com/J6N43oOj3M

I see the contest for leader of the BNP is heating up pic.twitter.com/WR2IQRgJdj

She’s making this ‘promise’ in the knowledge that the despicable Rwanda scheme will in all probability be found to be illegal and won’t come to its ghastly fruition – but what does it say about the Tory membership (and Mail readers) that she believes this is the way to win them? pic.twitter.com/zQDF83HtUl

Pretty much all the two candidates wanting to be Prime Minster now have to offer. It’s just “get Rwanda done” now pic.twitter.com/wWPNzD6nN3

James O’Brien summed up the relationship between questionable government statements and a certain set of client journalists.

The more I see of Truss, the more I think of @rickygervais’s The Invention of Lying. She still seems stunned that you can spout *any* old Brexity bollocks to the faithful, secure in the knowledge that they’ll lap it up while the Mail & Telegraph stick it all on their front pages.