Take this alternative hydration tip with a pinch of salt

When u/Revealed_Jailor chose to post this screenshot to Reddit’s r/Facepalm forum, they made the right decision.

Just look at the state of it. 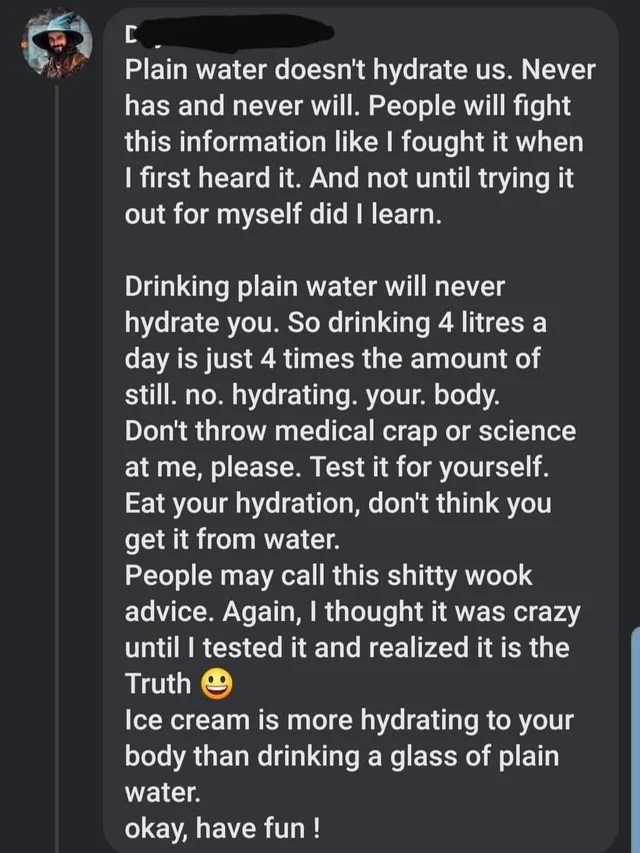 While he’s not wrong that foods help with hydration, a high sugar content actually causes dehydration – and no doctor is ever going to suggest a high-fat, high-sugar alternative to a drink of water.

Yes, you need electrolytes to rehydrate, but you ABSOLUTELY need water to rehydrate.
Mr_Abobo

It’s why all the cyclists in the Tour de France put milk in their water bottles. The real elite climbers like heavy cream.
kingbee43

“No medical crap or science” = “Don’t confuse me with facts!”
Swampwolf42

You don’t need no hydration after a water buffalo… it’s right there in their name.
Writing_Gods

Didn’t you read the post, you still need hydration from a water buffalo, it’s the ice cream buffalo where you don’t.
Jake123194

Humans are made up of 90% ice cream.
Thedankielamba

Yeah, cause it is.
skrrt_reynolds

It checks out guys.
DONT-EVEN-TRIP-DAWG

Ice cream has a shit load of salt in it so too much can actually dehydrate you.
zippypunched

A Redditor named u/drolikemine had a question.

Are we getting dumber or are dumb people getting louder?

We can’t rule out the possibility that it’s both.

This advert from 1971 has some seriously bad diet advice