Dan Walker, who recently made the move from the BBC Breakfast couch to Channel 5 evening news, shared the video of his own interview with the RMT’s Mick Lynch, to prove that it can be done without –

Or harping on about the Thunderbirds character on his Facebook profile, like Piers Morgan’s line of questioning.

We live in the age of the jabby, confrontational interview & the RMTs, Mick Lynch, has had a few of them.

If you treat people with respect, you can still ask tough questions & get decent answers allowing your audience to make their own minds up@5_News pic.twitter.com/pr6aYycBc5

He explained why he’d shared the clip.

I reposted this because someone messaged me and said “why are all you journos always out for a fight with every guest?”.
That is not the case. Information remains the most important thing.

As I walked home from Euston on Tuesday I got called a ‘scab’ by someone who said journalists ‘never listened’ and ‘didn’t care’. That just isn’t the case for the overwhelming majority of people I have either worked with or observed at close quarters.

His approach made a refreshing change.

Mick Lynch has been excellent when interviewers have repeatedly tried to trip and wind him up – he’s even better during this fair, frank and respectful interview from @mrdanwalker https://t.co/BcdVz2NbNo

THANK YOU for delivering the coverage of this that audiences deserve. There’s not been enough of it. I’ll be nicking this video to reach my journalism students interviewing skills!

First interview I’ve seen where the interviewer hasn’t immediately looked for confrontation. Look how he answered your Marxist question compared to Richard Madeley’s. Well done, you got the responses you deserved, thanks to the respect you gave him.

Not everybody was impressed, however. Dan’s old social media sparring partner, Piers Morgan, took time out of his busy schedule of arguing with tweeters to throw some shade, and this was the resulting exchange. 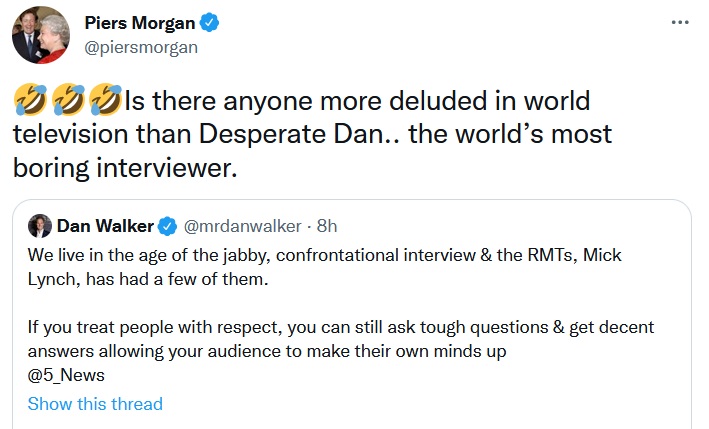 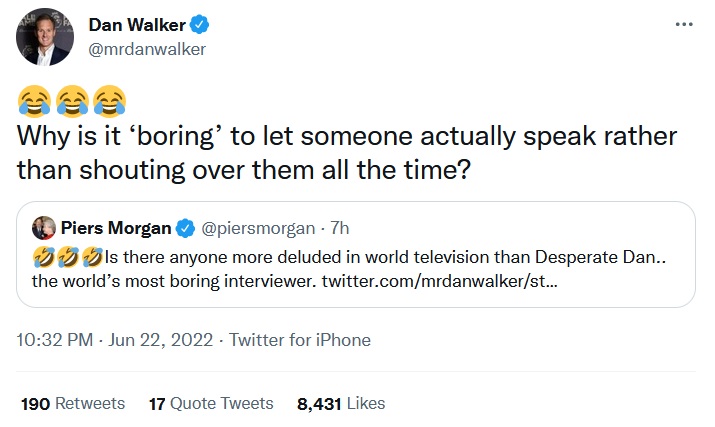 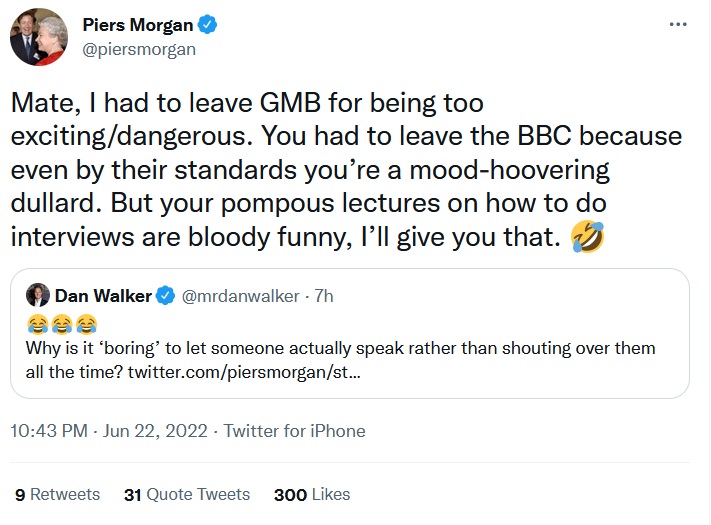 At the time of writing, Dan had had the last word – and it was quite the comeback.

😳😂
You left GMB because one of your colleagues called you out.

Your ‘exciting/dangerous’ response to that was 👇🏻👇🏻👇🏻

Next time I promise to spend at least 5 minutes on Thunderbirds 🚀 https://t.co/sJr9BfCgbo pic.twitter.com/69KPpFA2la

It went down well with other tweeters.

Twice in one day Piers has had his arse handed to him 😂 https://t.co/ZPMmouD0RG