Rail strikes have brought large parts of the public transport system to a halt today and a common line of attack among Tory MPs is to blame it all on Labour.

And surely none of them did it better than Conservative member for Workington, Mark Jenkinson.

It started when the MP spotted this tweet by journalist Kate Ferguson about how teachers are coping with the train stoppage.

And here was Jenkinson’s take on it. 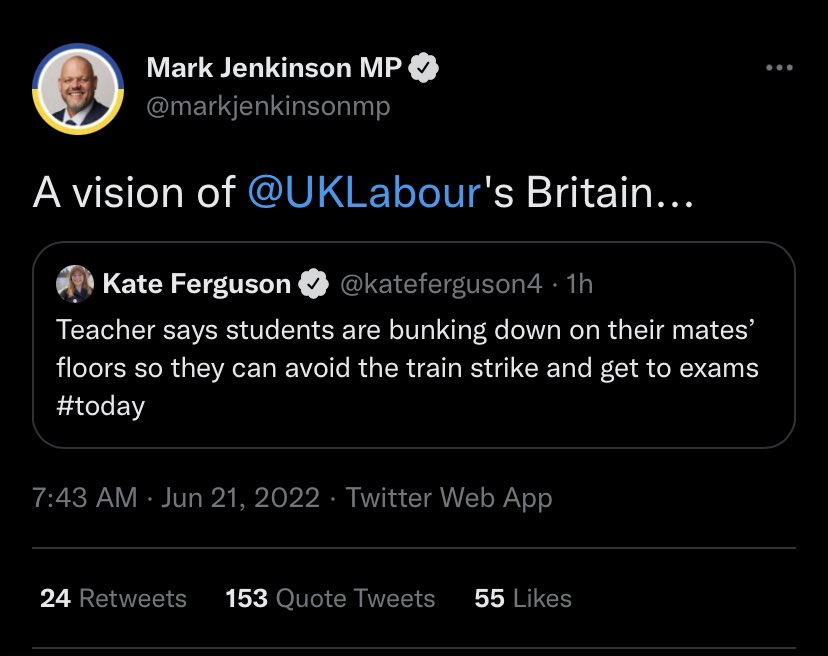 Except it wasn’t the slam-dunk he presumably thought it was. Here are our 9 favourite things people said about it on Twitter.

[pointing at thing literally happening right now under the Tories] if Labour were in power this is how shit life would be right now pic.twitter.com/QEJvQC8sLz

Just a Tory MP who doesn't realise thar his own party is in power – and has been for 12 years https://t.co/ZAGNQ2FYnQ

Every single time you think you've found the stupidest member of the 2019 intake, another one puts their hand up. https://t.co/UF63aOziYV

I'm not convinced voters will respond to this tactic of hammering "the strikes are Labour's fault" at them. It just makes the govt look like whiny babies who can't take responsibility https://t.co/FMbIeUsQF3

“Don’t vote Labour, things might get as bad as they currently are” is, I contend, not a great line to take. https://t.co/ZjVVDz8Wi5

VOICEOVER: Mark’s party has been in charge, at this point, for over twelve years. ~AA https://t.co/gFTMFw6hNO

Just in case the name rings a bell, Jenkinson was also the Tory MP who compared Boris Johnson’s Covid breaches to a parking fine.

You realise this is Tory Britain right now. And more importantly, so do voters.

This is the Truman Show or some sh**.

None of this is real.

There’s no way an actual human person would spend 12years in government, shaping a country… then say “See! This is what the country would look like if we WEREN’T in power”.