If you were wondering whether the government would be on its best behaviour in the run-up to this week’s two crucial by-elections, the answer seems to be a resounding NO.

The New European reported on a political story published on page five of the Times that was pulled from subsequent pressings and from the website.

The Strange Case of The Times's Disappearing Scoop About How Johnson Once Attempted to Instal His Mistress as His £100,000-a-year Chief of Staff. https://t.co/VUIDo3LDaQ

Here’s how the story – first touted in Lord Ashcroft’s biography of Carrie Johnson, First Lady: Intrigue at the Court of Carrie and Boris Johnson – appeared in the paper. 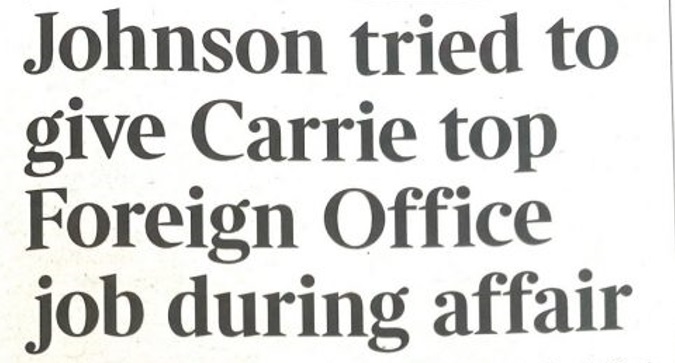 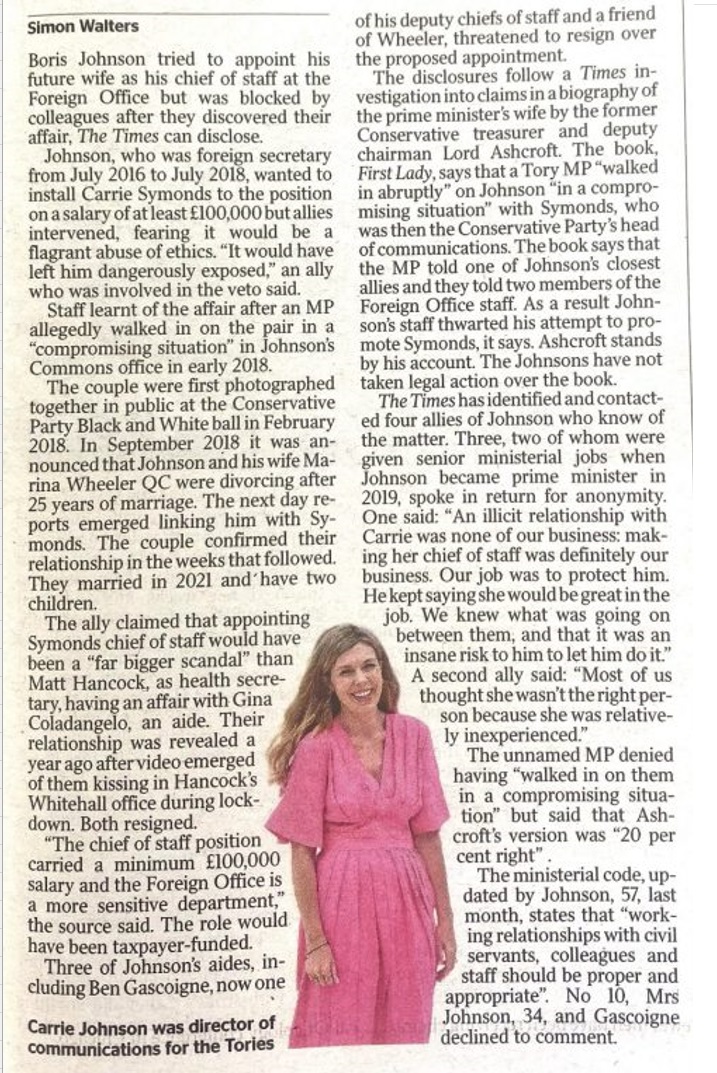 “The Johnsons have not taken legal action over the book.”

The Times journalist who wrote the piece, Simon Walters, is confident his report was accurate.

Times journalist: I stand by my Johnson scoophttps://t.co/al7SbQtvum

The mystery of why the story of Johnson’s alleged attempt to misuse public funds in the same way he was accused of doing with his other mistress, Jennifer Arcuri, has vanished from the Times calls into question the freedom of the press – a point picked up by some tweeters.

BREAKING: Looks like the prime minister nuked all the newspaper stories about Carrie's £100k job with a super-injunction. This looks an awful lot like "woke leftie cancel culture" to me. Can't believe the prime minister isn't so keen on free speech x

Bet Red Wall voters could not be more delighted that Boris Johnson, as Foreign Secretary, sought to give his extra marital girlfriend a six figure taxpayer funded job. He's just like us. Who hasn't. Hurrah for Boris pic.twitter.com/NcHrTfSwfB

And anyone doubts he used public money to benefit Arcuri? https://t.co/aaYXHNAdCC

Hey British public you know that £100,000 he was going to pay his mistress was coming out of your pocket ….right ?#JohnsonTheCorruptPM

Extraordinary that the silencing of the Sunday Times & Mail, over a story that alleges gross misconduct & corruption by Boris Johnson, failed to get a mention in the paper review on the BBCs flagship #SundayMorning politics show