To the world of Mail Online now, where the paper has got itself into quite the froth over the suggestion that builders in the UK don’t live up to the stereotype presumably ingrained at Daily Mail Towers.

Not only that, they’ve ‘gone WOKE’ – their caps not ours, obviously. And this is why. 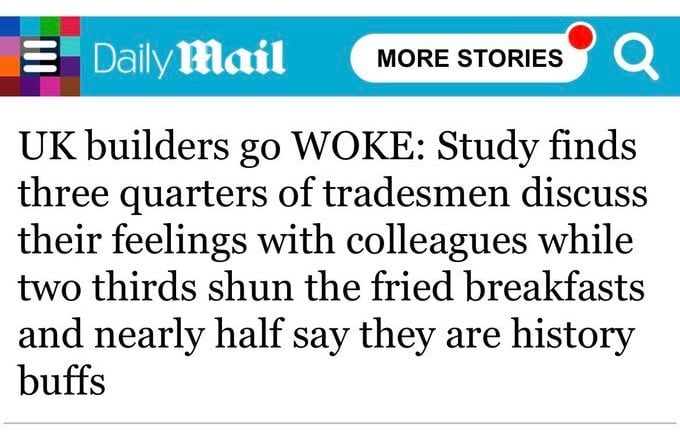 Here’s a little bit of what the article says just in case you can’t bring yourself to click through (and a reminder, as if you need one, that the Mail typically uses ‘woke’ as an insult).

‘Instead, modern tradesmen are sensitive souls more likely to enjoy yoga, muesli, listening to Radio 4 and sharing their feelings, a survey has found. In a poll of 2,000 builders, three quarters said they regularly discussed emotions with colleagues; two-thirds shun fried breakfasts; and one in five is an art-lover.’

And these are surely the only 13 responses you need.

Construction workers had the highest male occupation morality rate from suicide between 2011 and 2015, so if discussing feelings is 'woke' then this seems like a very good and important thing pic.twitter.com/ThdOQIMIf3

How dare working people educate themselves and choose healthier lifestyles. They'll be selling their whippets, forgoing flat caps and not looking up to the upper classes next. pic.twitter.com/7ZnyaLuhvC

Daily Mail slapped a bowl of cheerios out my hand and called me a woke cunt pic.twitter.com/N8oEjL6HVR

People who do manual Labour read books and have friends. More at 6. pic.twitter.com/esO3E6cTV4

In my day builders had a fry up every day to get their arteries good and furry before having a massive coronary at 52 brought on by impacted emotion, and also their knowledge of repeal of Corn Laws was sorely lacking. pic.twitter.com/lozshqX2cC