Instant karma came and got the person who stole this bike because its owner turned up and this happened. 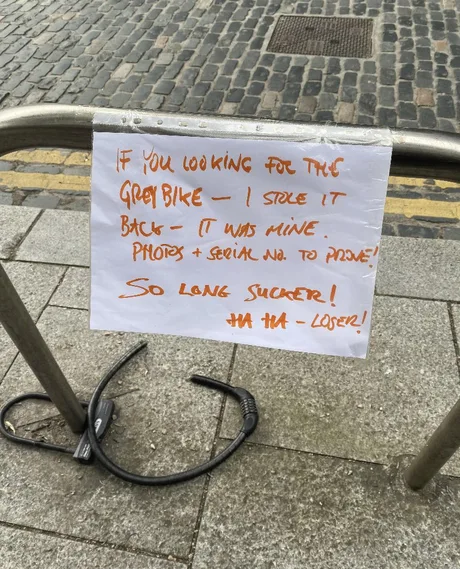 Let’s hope the person he took it back from was the person who stole it (and not someone he sold it too) but anyway … The picture went viral after it was shared on Reddit by _Xyreo_ and prompted one person to ask this.

‘What is the legality of a situation like this?’
babblingbrians

‘I found my bike about a year after it was stolen. I called the cops and waited around about an hour for them to show up and then tell me they had no way to know it was mine.

‘So I started digging up photos and receipts for various parts (I built the bike myself), and they just blew me off and said it proved nothing, so they would “leave a note for the owner.” They clearly just couldn’t be bothered, and I couldn’t get over the irony of leaving a note for the “owner,” so I waited until they left and spent another hour working to break the fucking lock and took my bike home.

‘Moral of the story: your property is legally yours, and someone obviously can’t take ownership through theft. But the cops don’t f-cking care, so just get your shit back.’
gertalives

And it also led to people sharing stories of when something similar happened to them. This was our favourite.

‘Did this in college, my bike vanished off of campus and showed up on Craigslist for $420, when it was a $1500 bike with custom red tape and saddle. Managed to heist it back in a Kroger parking lot in probably the stupidest and wildest evening of my young adult life.’
Isolat_or

‘Ok ok, I’ll tell the story. Once I saw it on Craigslist, I asked the person to meet up in a public place so I could check it out. They did, and when we met up, I asked if I could take it for a little spin around the parking lot to test it out. The guy said “sure, just don’t ride off with it!” and we both laughed at his joke.

‘I got on the bike, did a few little laps like I was testing it out, then just booked it full speed as fast as I could. He realized I was taking it almost immediately, and somewhat of a chase ensued. I ended up ducking down a few alleys, heart pounding, and effectively evaded him. It was a huge rush and a bit dangerous looking back, but I got that bike back!’
canibuyatrowel

‘Bold move signing it off as “Loser”!’
MrB-S