This anti-vaxxer parent got precisely the comeback they deserved

Leading contender for comeback of the week is surely this one, a response to an anti-vaxxer parent who was so proud of their beliefs that they shared them on Twitter.

And got entirely the takedown they deserved. 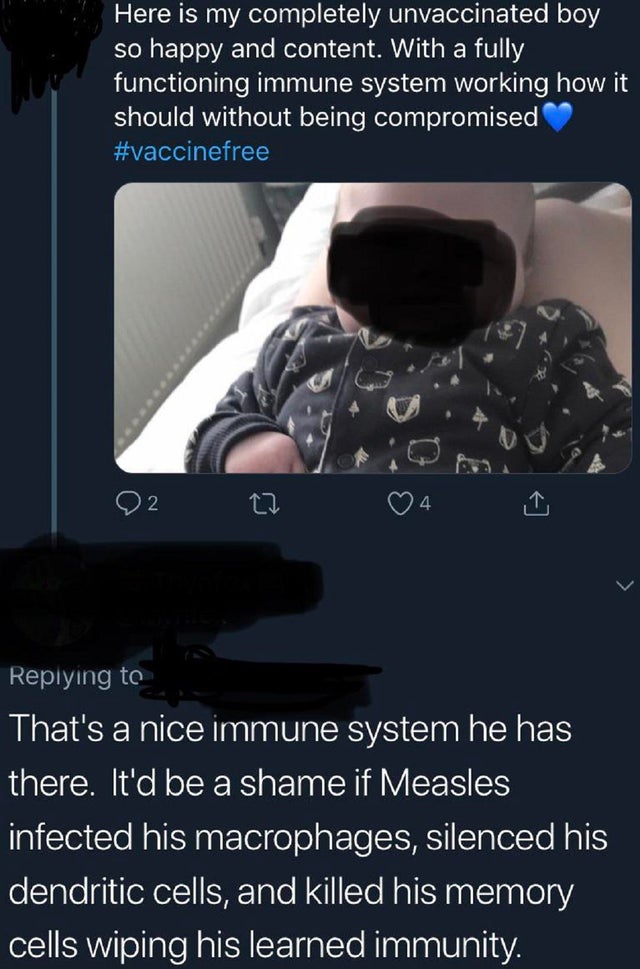 The exchange has just gone viral on Reddit and prompted lots of responses, from anger to concern and disbelief.

‘I fear for the babies in this world with parents like that.’
sameoldrussianstan

‘How is this child going to go to school? Where I live there’s only medical and religious exceptions, being a whack job anti vaxxer isn’t an option.’
rhodycakes

‘I would bet my left dick this person homeschools their kids because schools don’t teach “the truth.”‘
CrushCoalMakeDiamond

‘Not only is she endangering her own child, she’s endangering other children who cannot be vaccinated. Way to go mom.’
marsbartender

‘You think she cares about other people?’
Deraj2004

Final word to the Redditor who posted the original pic.

‘Most people don’t know this, but if you’re not vaxxed you can download immunity templates directly from the cloud to protect your body, but only on 4G LTE networks.’
beerbellybegone