Alexandria Ocasio-Cortez is no stranger to taking people down on Twitter and this was up there with the congresswoman’s very best.

AOC took to Twitter to bemoan how she was tired of having to stress about an explosion of hate crime being facilitated by ‘some billionaire with an ego problem’.

It caught the eye of Elon Musk, who is in the process of buying Twitter and, well, this is how it panned out. 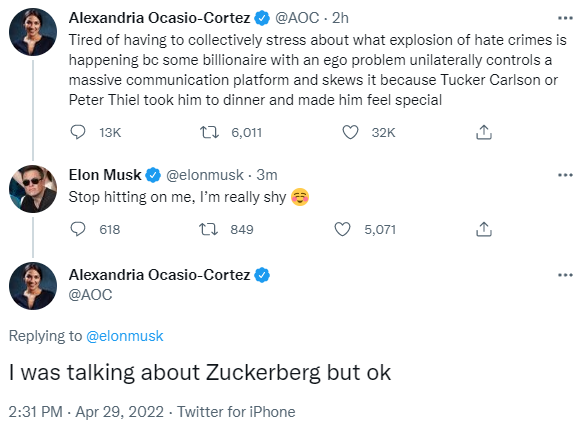 She later deleted the tweet, saying she tries to ‘avoid giving people with massive ego complexes like this the attention and QTs/replies they crave and are seeking (when I can help it )’.

But it didn’t stop her later retweeting the exchange like this after it was shared elsewhere on Twitter.

‘LMAO that was a pretty great back-and-forth.’
flux40k

‘The first rule of taking on AOC is never take on AOC.’
teratogenic17

‘🎶 You’re so vaiiiiin, I’ll bet you think this tweet is about you. Don’t you?’
NormalMacdonald