You’ll have seen by now the Mail’s misogynistic attack on Labour deputy leader Angela Rayner which prompted such widespread condemnation over the last few days (and you can read Rayner’s response here). 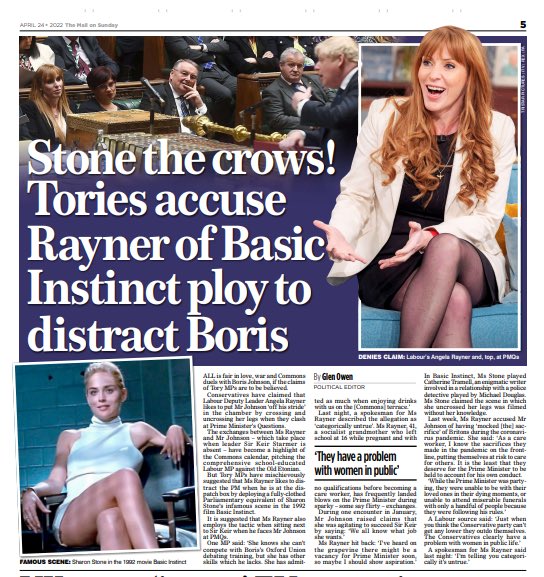 It prompted the House of Commons speaker Sir Lindsay Hoyle to call the Mail on Sunday editor David Dillon to a meeting, which the editor has since rejected.

Instead they doubled down on the attack in its sister paper, the Daily Mail today. And there was one element of its front page that particularly caught people’s eye. These are surely the only 5 responses you need.

Amid stiff competition, the most unsettling words on this front page are, “Sarah Vine’s verdict”. https://t.co/YnHRIr4qGh

Any culture that wants a verdict from Sarah Vine on anything is beyond redemption. Let the UK fall into the sea. https://t.co/VbkUYubHRZ

Thank God for respected newspaper The Daily Mail✅
Thank God for brave Sarah Vine✅
We MUST defend free speech!
People will be cheering this courageous stance by The Mail.
Writing about the uncrossing of legs is a fundamental constitutional right respected by all decent folk.🇬🇧 pic.twitter.com/uV1PhtblnH

‘Forgive me, but if someone wrote a story explaining how I was so distracting, my male colleagues could barely function in my presence (a highly implausible proposition, I admit), I really don’t think I would be quite as upset as Angela Rayner seems to be.

‘I mean, as a compliment it may be a rather back-handed and old-fashioned one.

‘And, yes, it’s obviously a sexist notion, the idea that a woman might be judged by her appearance as opposed to, say, her grasp of macro-economics; but, let’s face it, in the real world these things do happen.

‘Speaking personally, I agree with Mae West, who once said that it’s better to be looked over than overlooked. Then again, everyone is entitled to their opinion …’

The Mail implies today that I somehow enjoy being subjected to sexist slurs.

They are mortifying and deeply hurtful.

‘She loves it really’ is a typical excuse so many women are familiar with.

But it can’t be women’s responsibility to call it out every time.

I don’t need anyone to explain sexism to me – I experience it every day.