12 crushing takedowns of this terrible take on Russian humanitarianism

According to reports, Ukraine and Russia have agreed to the creation of safe corridors to allow refugees out and humanitarian aid in.

BREAKING: Ukraine says it has reached a tentative agreement with Russia to organize safe corridors for civilians to evacuate and for humanitarian supplies to be delivered. Under the agreement, cease-fires would be observed where safe corridors are created. https://t.co/8mZYHvXBRr

If Russia can agree to safe corridors for humanitarian aid, why can't it just agree to a safe world and go the fuck home?

Prior to that announcement, political commentator and author, James Melville, demonstrated his smooth transition from unregistered epidemiologist to geopolitical consultant by sharing footage from TASS, a Russian state-owned news agency. 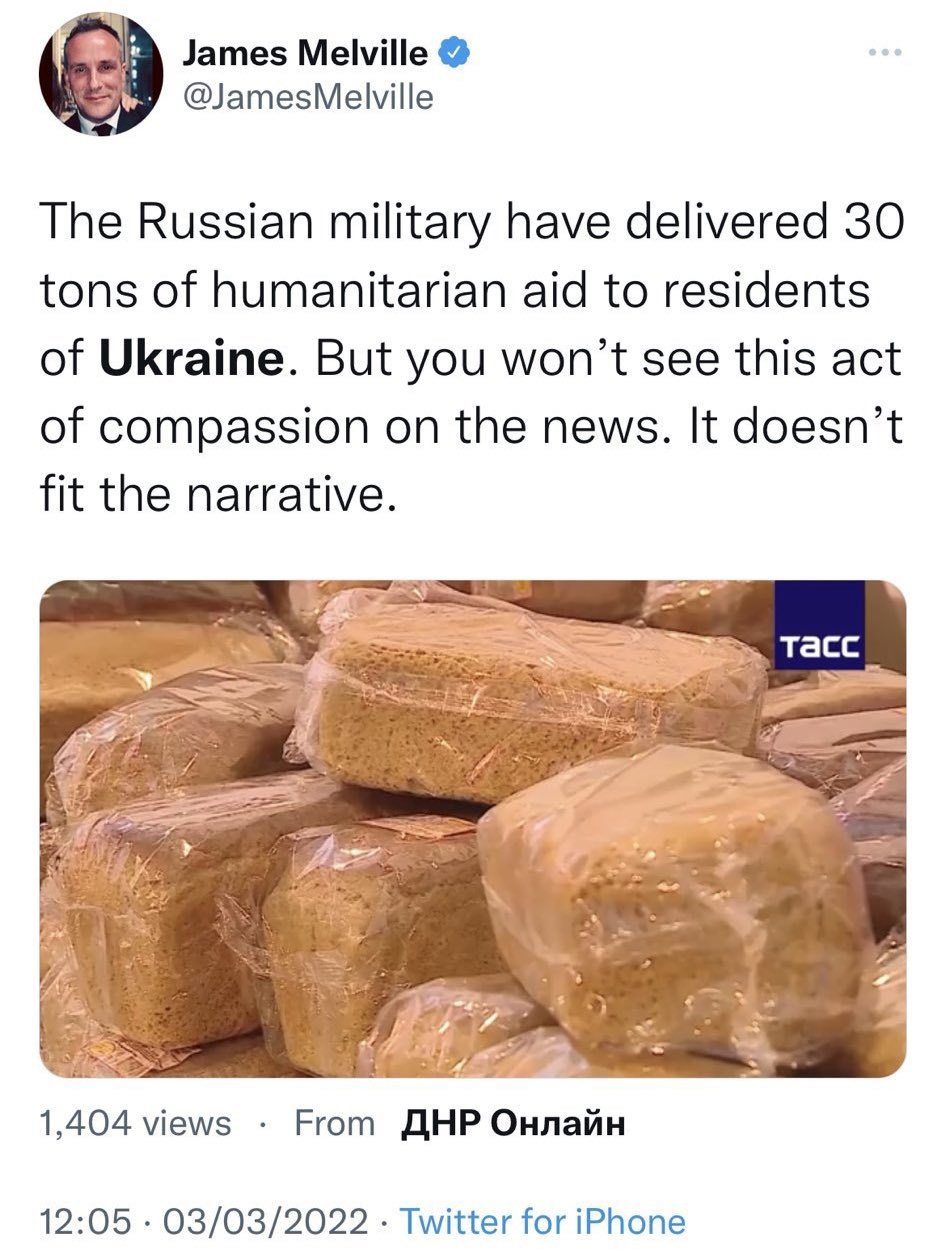 Although he quickly deleted the post, the damage was done – and these responses shone a light on all the problems with it.

Why do they need humanitarian aid James, you fucking thumb pic.twitter.com/rNUUgAG507

Oh my god. What are you doing. pic.twitter.com/CT6UN89G0V

‘Who’s funding James Melville?’ is not something I’d given much thought, until now. pic.twitter.com/Bdfbw64g4x

I can only conclude that James Melville is like the bus in Speed. Somebody planted a bomb in his head some time ago and if he stops tweeting bad takes for a day it explodes. pic.twitter.com/7yNgzhml0l

One loaf of bread sellotaped to every rocket. pic.twitter.com/1f0HCB1hry

the first rule of Twitter: James Melville is always the very worst thing on it pic.twitter.com/QT9ixAhvAT

Have you noticed that when Lord Tsar Tsar James Melville speaks there's an echo? It's because his voice reverbs around that giant empty head before being released by his brain fart amplifier. pic.twitter.com/X9x93Aka0X

Can’t believe UK media outlets aren’t bringing us news of the humanitarian work undertaken by the war criminals currently bombing civilians out of their homes.

Good job we have James Melville, no doubt fresh from a visit to an admiring Fife butcher, to set the record straight. pic.twitter.com/z3NmmkeZ15

There's no way that James Melville tweet is real? I've only seen screen shots. Did he delete it? Did anyone see it?

If it's real, the only plausible explanation is that after we failed to stop Brexit, he figured it's just easier to be on the wrong side of history on everything.

Also James Melville: “The Cosa Nostra have sent gifts and money to the families of the men they murdered. But you won’t see this act of compassion on the news. It doesn’t fit the narrative we have about the Sicilian mafia”. pic.twitter.com/VBMUoLxawo

I remember when the German propaganda took photos of German soldiers being filmed giving bread to Jews. Then the bread was taken back when the film stopped. James Melville has a following of 250k has said the Russian are given food supplies to the Ukrainian people, photo of bread

James Melville is so far up Putins arse he can see Nigel Farage’s feet.

I don’t even need to tell you what Baskerville just called James Melville.