Much has been made of the fact that Ukraine’s president, Volodymyr Zelenskyy, has taken a hands-on approach to defending his country, despite intelligence suggesting he is a specific target of Russian snipers.

He was offered the chance of evacuation by the USA, but turned it down.

New @AP reporting tonight: Ukrainian President Volodymyr Zelenskyy was asked to evacuate Kyiv at the behest of the U.S. government but turned down the offer. An American official tells me Zelenskyy said, “The fight is here; I need ammunition, not a ride.” pic.twitter.com/oSpa1vdX29

President Volodymyr Zelenskyy posted a new video of himself declaring Ukraine is 'not putting down arms,’ despite online chatter pic.twitter.com/YomBeAZG0p

In the UK, however, the PM has been coming under metaphorical fire for what is seen as a weak response to the Russian invasion, in terms of sanctions and offers of asylum to fleeing Ukranian citizens.

This is @BorisJohnson attending mass at a Ukrainian church in London this evening.

To date there is *still* no simple sanctuary route to the UK for Ukrainian refugees fleeing war.#StandWithUkraine 🇺🇦🌻 pic.twitter.com/cMOy6Y9ahj

One Tory councillor, Joe Porter, shared a photo of the PM with some of the staff at RAF Brize Norton, with an extraordinary claim about the scenario. 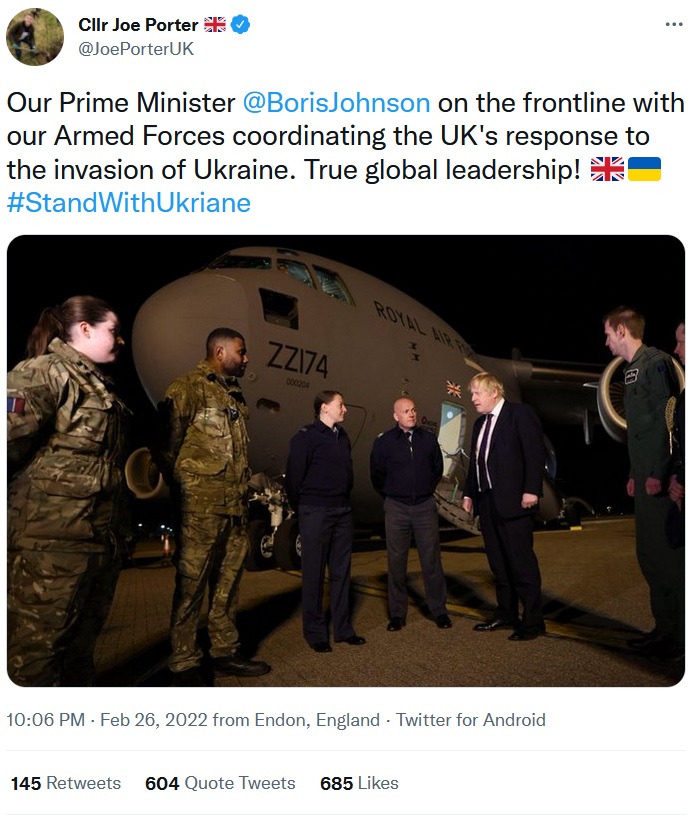 It seems Mr Porter must have had Geography lessons from Dominic Raab. We’re not sure who taught him how to spell Ukraine. The reactions were scathing.

You might do well to consider how disrespectful this is to Ukrainians who are on a frontline.

And now the Tories are jumping on this crisis to try & repackage Johnson as some war time hero when in reality they've done the bare minimum.
"frontline"
Fuck off!
I despise them pic.twitter.com/2XdmNn7YcS

Christ this is embarrassing. “Frontline”. https://t.co/2R3LzpdtsM

On the frontline of what? The buffet? Listen, I get it, you want him to look tough, but not only it doesn't make him look tough, it also makes you look like a desperate fool. Stop it. https://t.co/F3g65mm7nS

the frontline where?? you absolute fud https://t.co/qgFm4MwirD

I think you’re confusing a photo opportunity at RAF Brize Norton with actually standing on the front line like Volodymyr Zelenskyy. An easy mistake to make when your head is buried deep in somebody’s rectal orifice.

The only 'frontline' Boris Johnson will ever be close to is Dilyn's flea control. https://t.co/v8c9nJMnbh

Whilst president Zelensky is hiding away, please spare a thought for our heroically brave Prime Minister holding the front line at Brize Norton.#StandWithUkraine 🇺🇦

Please delete this. He’s not on the frontline. Ukrainians are. https://t.co/HUojGcqJ87

He did delete it – and replaced it with this.

Very proud of our Armed Forces who are working hard, backed by @BorisJohnson, to help Ukrainians in their greatest time of need. This is our country at its best. 🇬🇧🇺🇦 #StandWithUkraine pic.twitter.com/yQhK53oF5E

People are laughing because this Tory Councillor describes Johnson meeting with armed forces at RAF Brize Norton as 'being on the frontline'. To be fair, Johnson is so hated now, that just leaving Number 10 and mixing with British people is an act of bravery. He's a brave boy! https://t.co/T3bK1VfJKl