He began with this widely panned piece of self-incrimination. 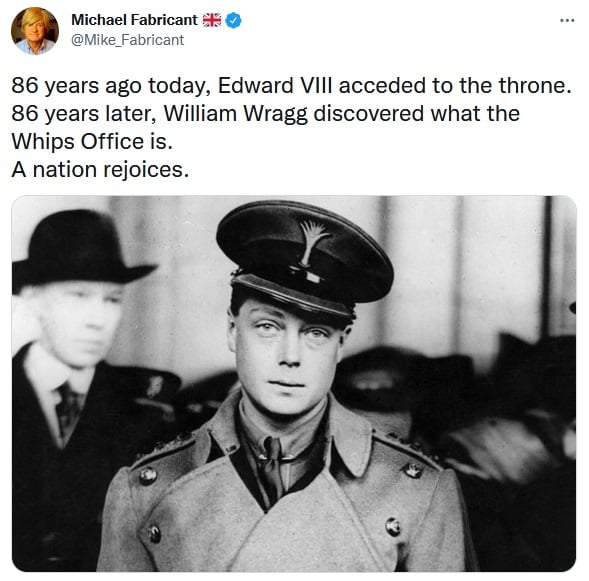 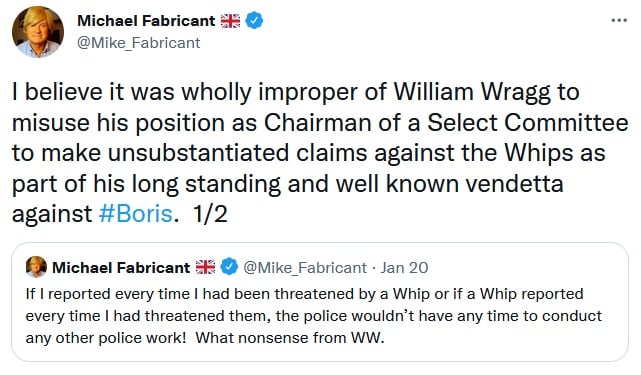 He also retweeted tweets criticising Wragg and praising Johnson, like this one.

Boris Johnson wouldn’t stand up in parliament and tell a fellow MP ‘In the name of God go.’
He wouldn’t defect to Labour.
As a new MP he wouldn’t hatch a plot against his party leader.
Why?
Because Boris Johnson is an honest man, a man of honour & people are now seeing that.👍🇬🇧 pic.twitter.com/7t9hrkV69F

But Sir Michael Take – as in ‘Mickey Take’ – isn’t an actual MP, and you’d sort of think an actual MP might just know that, but even so – surely “Boris Johnson is an honest man” really gave it away.

Sir Michael was delighted with the endorsement.

Absolutely delighted that @Mike_Fabricant has retweeted me.
It’s good to know there are some intelligent, rational Conservative MPs we can rely on. Michael is obviously not easily fooled and can see the truth. Boris Johnson is so lucky to have a supporter like him.😁👍🇬🇧 pic.twitter.com/SYpAYGGtpQ

Michael’s having a smashing day on the Twitter today. https://t.co/zPwM859YgT

@mrjamesob This is wonderful.
Michael Take MP is (obviously) not real.
(The jury is out on Michael Fabricant). pic.twitter.com/48eHfA0lCq

As @liamnorris1001 so beautifully put it –

“I’d have thought it would take more than a few hours to outdo confirming bullying and blackmail, but Fabricant is on a roll today.”