Just when Boris Johnson’s week couldn’t get any worse, it just did – a lot worse – after a senior Tory MP accused government ministers of ‘blackmail’.

Conservative MP and Commons committee chair William Wragg alleged that ministers, whips and advisers have intimidated and attempted to blackmail colleagues who they suspected may oppose Boris Johnson.

WATCH: Tory committee chair William Wragg MP accuses No 10 of blackmailing backbenchers who have considered calling for vote of confidence in the PM. pic.twitter.com/TLyohZMill

It goes without saying that it’s a huge developing story, but we’re here for one particular bit of it, the riposte it prompted from Wragg’s fellow Conservative MP, Michael Fabricant. 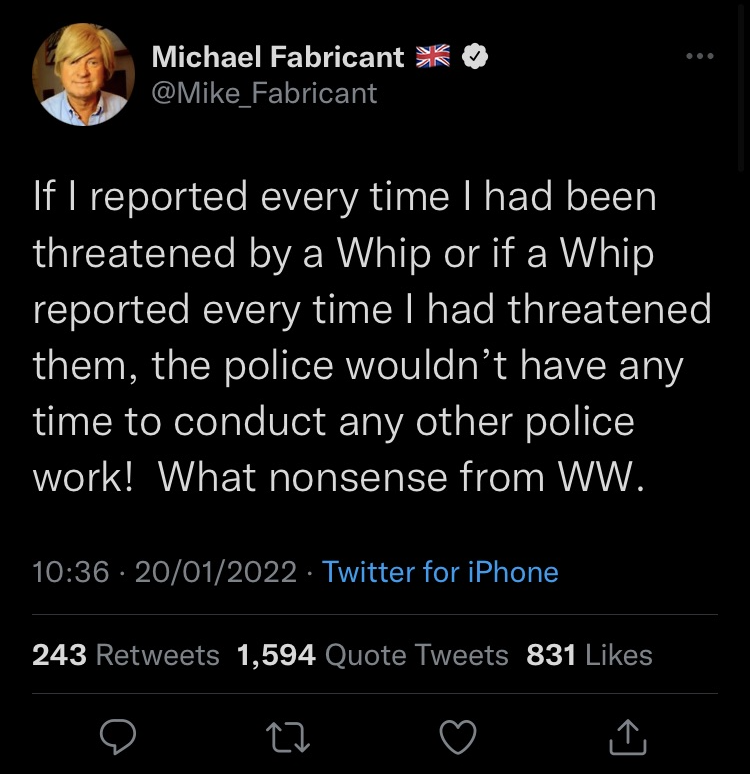 And it’s fair to say it wasn’t the slam dunk he presumably thought it was.

Here are our 19 favourite things people said about it.

In his defence, my client does this sort of crime all the time. https://t.co/e3Cvfcquqf

gonna commit so many crimes that the police decide it's too much effort to investigate them https://t.co/7MKoPCFKzE

Thanks so much for the feedback everyone on my character 'Michael Fabricant' I was worried it was a bit too over the top and unbelievable, but I guess a silly man with a blonde ferret on his head slots right into the incompetence and blackmail of our current government.

"I threaten colleagues" is a truly exceptional defence https://t.co/bm1SeetGjR

Same with me and murder. If you do enough crimes, the police can’t actually keep up. Nice work MF https://t.co/9OcptjjcUa

2. It did happen, but the Prime Minister knew nothing about it.

3. The Prime Minister knew about it, but it wasn’t technically blackmail.

4. It was blackmail, but the Prime Minister wasn’t told that blackmail was against the law. https://t.co/stOkehR2MF