Dom Joly came to the public’s attention via his hit comedy series Trigger Happy TV, but has gone on to create many more hit shows, best-selling books and a popular podcast.

He hasn’t held back in his public criticism of the government for – well, everything. He recently took to his official Facebook page to share this. 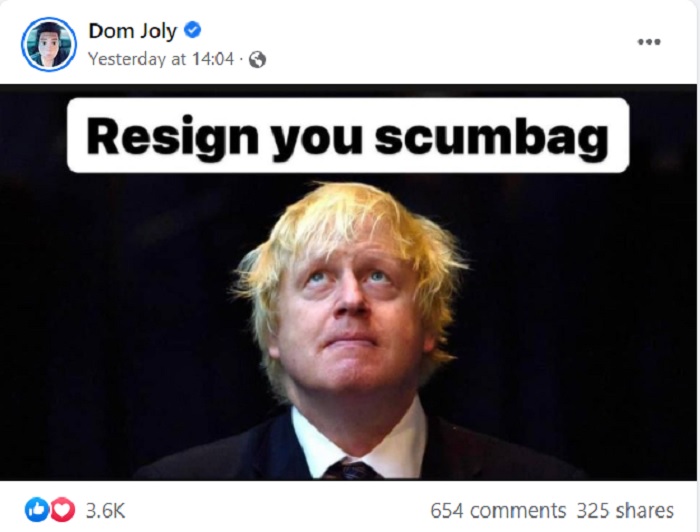 A lot of people were on the same page in more ways than one, leaving comments in support of the sentiment, with a dose of scepticism that it could come to pass.

That would mean he would have to show some integrity for himself and his party so he’s not going to resign anytime soon.
Although I think he should probably have a go at starting to steam off that very expensive wallpaper ready for the next tenant.
John Doh

He was not at a party! 😡
He was merely conversing in an informal manner for an allotted period of time of which some people may or may not have brought along THEIR OWN alcoholic beverages.
This could have happened to anyone.
Alex Dovey

Never underestimate the probability of stupidity. The Tories know they’ll vote for him again…..
Les Wilkin

He won’t because he’s a narcissist who loves power , delusions of grandeur and thinks he’s Churchill 😄
Nikki Bonner

Amazingly, there are still some Boris Johnson fans out there – and they weren’t happy with the post.

Time to move on & let him continue the great job he & this government is doing . Yes there will be mistakes made but overall the Government is handling the rollout of the vaccine, furlough & the economy better than the rest of the world!
Steve C Montero

Believe everything that the media says. They are always truthful.
Ed Wright

He’s a fall guy for all of this mess!!
Ryan McNamara

One Johnson supporter decided to make it personal. 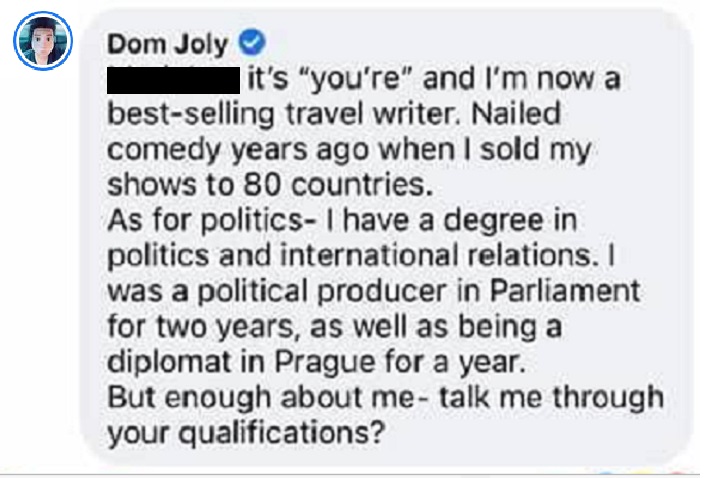 This means that Dom Joly joins Tom Morello in the ‘Perfect Clapback’ Club.

If you’re thinking of going down the ‘Stay in your lane’ route, firstly – don’t, and secondly, if you really must – at least do a quick background check.