The latest in an occasional series, warning sign of the day goes to this magnificently straight-talking effort telling cave divers in Mexico to turn round and go home.

It went viral after it was shared by Redditor Responsible_Flight_8. 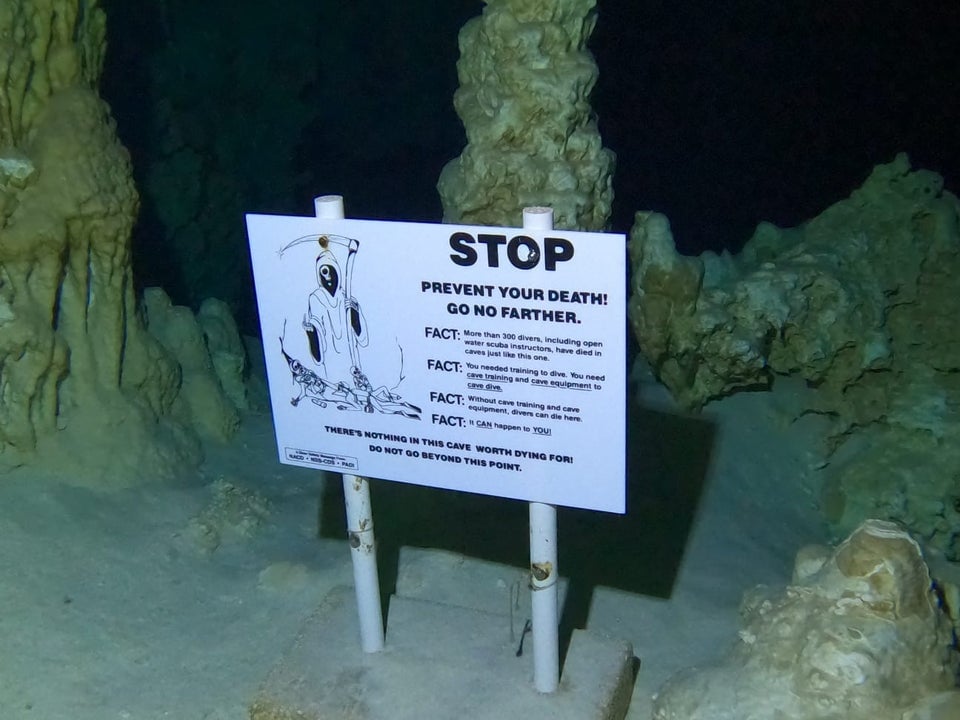 Prevent your death! Go no further.

FACT: More than 300 divers, including open water scuba instructors, have died in caves just like this one.

FACT: You needed training to dive. You need cave training and cave equipment to cave dive.

FACT: It CAN happen to YOU!

THERE’S NOTHING IN THIS CAVE WORTH DYING FOR! DO NOT GO BEYOND THIS POINT.

But it’s the grim reaper that really makes it, obviously.

And here are just a few of the comments it prompted from people who know a lot more about this sort of thing than we do.

‘Diving is dangerous. Dangers are mitigated in open water because, no matter how severe the equipment failure, you can always reach the surface by ditching your weight belt and ascending.

‘You couldn’t pay me enough money to dive in a place where there’s nothing but solid rock overhead.’
wsf

‘When I was about 12, we vacationed in Mexico. We found a cave entrance that had a gate on it. But the gate wasn’t locked, so we went in for a peek.

‘Two quick turns later it was pitch black. We had stumbled upon it just walking around and cell phones with flashlights weren’t a thing yet (circa 1990ish). So we bailed and got a flashlight.

‘We came back later that day, and right at the spot where we had stopped was a cliff drop-off into the cave. The flashlight didn’t see the bottom. We were probably 2 steps from walking right off the edge in pitch black. It still haunts me to this day.’
Twoslot

‘I worked with a guy who did some cave diving. He said the first day of his class the instructor said something like:

‘He said about 5 of the people in a ~20 person class just got up and left after that introduction. Which may have saved their lives.’
Magmaigneous

Dad joke of the week