You can’t have missed the opinion-dividing plight of tennis star Novak Djokovic, who has been in quarantine awaiting a decision on whether he could be deported from the country.

While an unvaccinated Novak Djokovic is in court arguing he should be allowed to stay and win a few million dollars in a tennis tournament, I’ll be at the hospital sweating in full PPE as I look after critically unwell unvaccinated covid patients while making hardly any money

His initial medical exemption from proof of Covid vaccination to enter the Australian Open was initially deemed insufficient to allow him entry to the country, reportedly due to having presented the wrong documentation. A judge earlier today ruled that he could stay for the competition.

Former MEP and serial failed parliamentary candidate, Nigel Farage, immediately hitched his wagon to the stricken sports star, with a series of tweets including this. 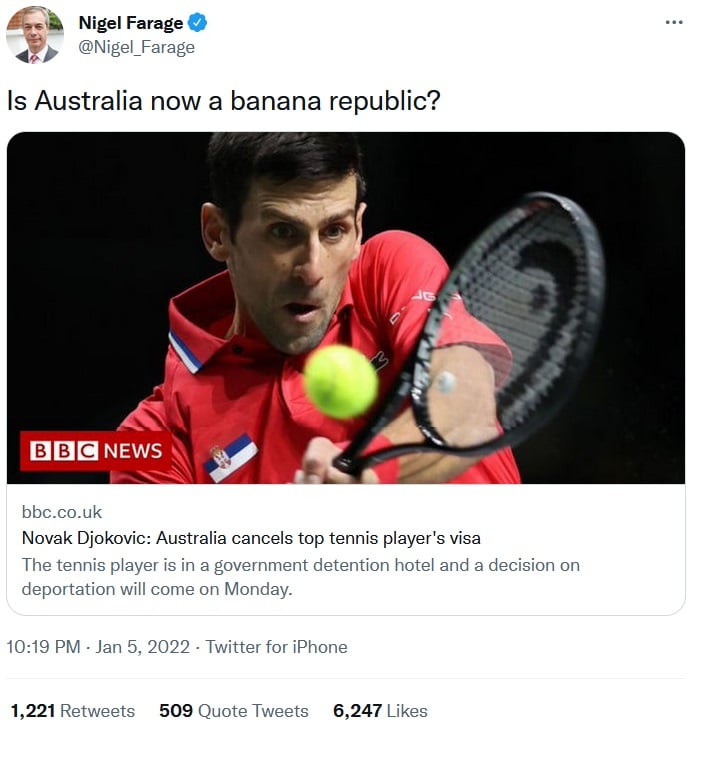 People – and a certain cat – were somewhat surprised by his stance because of many many tweets and soundbites like this.

Farage complaining about Australia controlling its borders is one twist I didn’t see coming.

Wait. So now @Nigel_Farage is supporting immigration into other countries by people not following the laws of that country. That sure wasn’t on my 2022 bingo card 🤷‍♂️

Nigel Farage, sowing: Hell yeah, this is great
Nigel Farage, reaping: I don’t like this at all pic.twitter.com/taHwJoSfBd

It seems Nigel Farage only likes border control when it's used to keep brown people out rather than thick twats. pic.twitter.com/JDOym6IcqA

Even more people were surprised, however, when he shared this news. 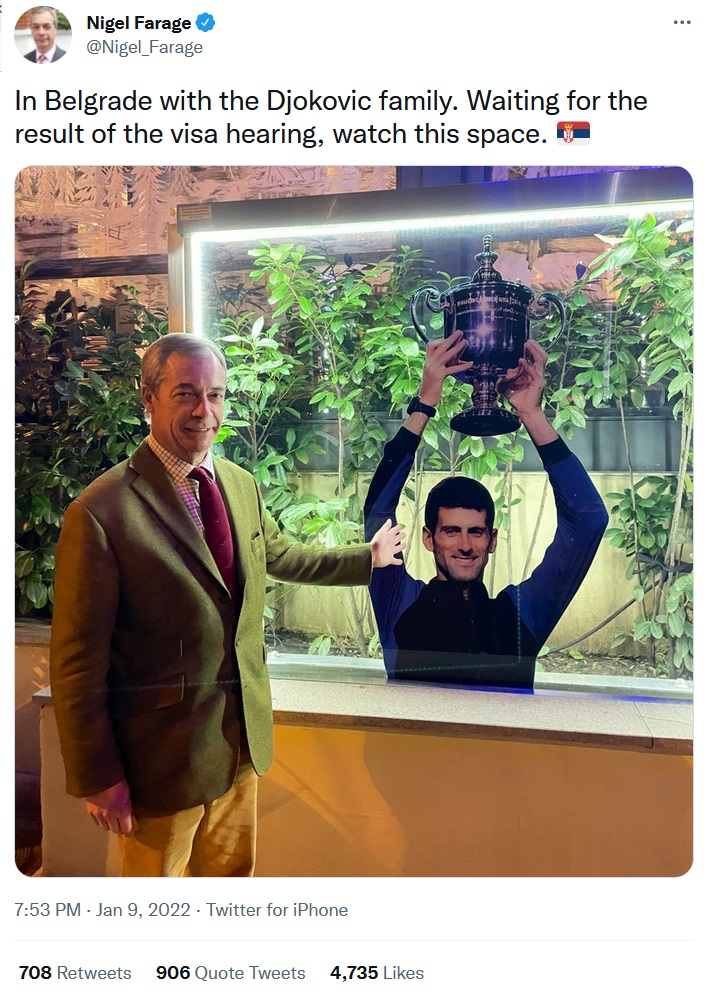 Tweeters reacted much as you’d expect – and it was a joy to behold.

Imagine being Nigel Farage and thinking – despite my racism and insistence that my country must have control of its own borders – the Djokovic family need me, a foreigner, to tell a foreign country what to do with their borders.
Never elected. Just a boring man.

This is properly strange. Farage putting all his efforts into helping one of the richest sports stars in the world. pic.twitter.com/z48ZIjK6Px

why does he always dress like he's about to shoot a pheasant https://t.co/SFbQHHlYha

"For some people, being wrong is just an occasional hazard. For me, it's a full-time job". pic.twitter.com/qh9UPVaE5O

I for one am loving this new incarnation of @Nigel_Farage as a human rights activist railing against the inhumane immigration policies of right-wing governments https://t.co/v8P4HbJU0T

Damien Hirst has gone too far this time https://t.co/wJK69iGves

"Out for a pint with my mate. He's stood outside having a Woodbine." pic.twitter.com/qyRnAq2CoY