This is strike 3. Which is supposed to mean you’re out. pic.twitter.com/IZWUsNyC8p

The post that got her said we shouldn’t bother testing for Omicron since it’s just the sniffles.

And it’s not just a suspension this time, apparently.

The suspension is permanent, although she still has her official congressional account.

And what better way to mark the occasion than with these 9 times she was hilariously owned.

1. When she called Alexandria Ocasio-Cortez ‘a little Communist’

Marjorie Taylor Greene calls AOC a little communist and says locking her up is a good idea. She also says AOC isn’t an American pic.twitter.com/aCT1JTtC69

First of all, I’m taller than her https://t.co/H6rXG66GJk

2. When she said this about Covid and God 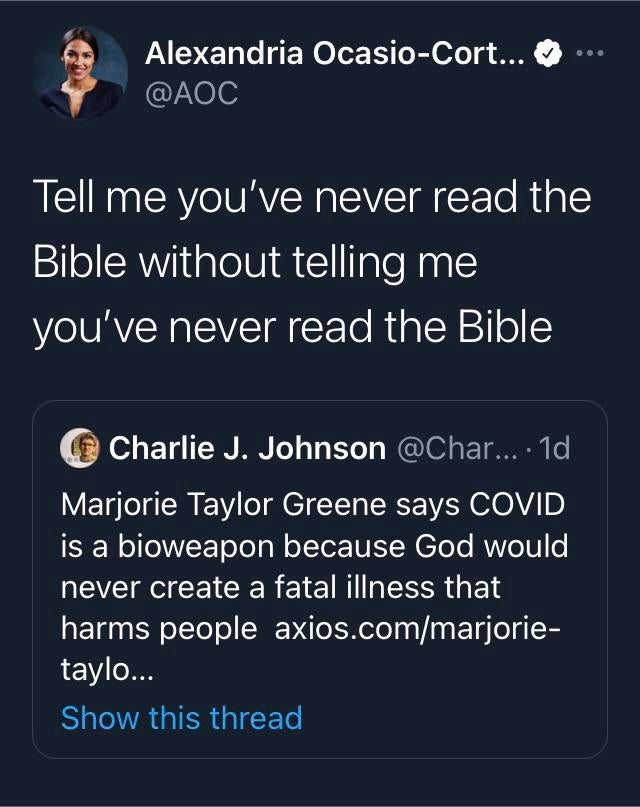 3. When she said she doesn’t believe in evolution

To be fair, she is strong evidence for her claim https://t.co/55YVhjIZ2P

4. When she boasted about winning unopposed

I ran for office (and was elected with 74.7% of the vote) to represent the people, not the politicians.

And that’s exactly what I’m doing.

How does an unopposed candidate lose 25% of the vote?

7. When she filed articles of impeachment on President Joe Biden

I just filed Articles of Impeachment on President @JoeBiden. pic.twitter.com/mcwEEkKiHL

They should open a third chamber of the legislature specifically for elected idiots so dumb, they assault Americans’ brains just by speaking. It wouldn’t make laws. It would just be a spectacle. Like a Dumb Sea World.

You and Boebert could carpool.

8. When she smelt something ‘fishy’ about the election

It’s not that hard.

9. And finally, when she wore this ‘censored’ mask

Yes, Marjorie Taylor Greene is wearing a mask that says “CENSORED” as she speaks into a microphone on the floor of the U.S. House of Representatives. pic.twitter.com/i7401gseIU

Leaders of this movement are defined by having great privilege while feigning martyrdom and one couldn’t sum it up with a more apt visual. https://t.co/Ik6FLQ7qrp