Right-wing anti-vaxxer, gun-nut, Trump fan and actor – in just about that order – Kevin Sorbo may have become famous for playing Hercules, the brave and powerful demi-god, but it seems his main claim to continuing fame is complaining about not getting his own way.

Who could forget the time he seriously misinterpreted what is and isn’t acceptable in San Francisco? 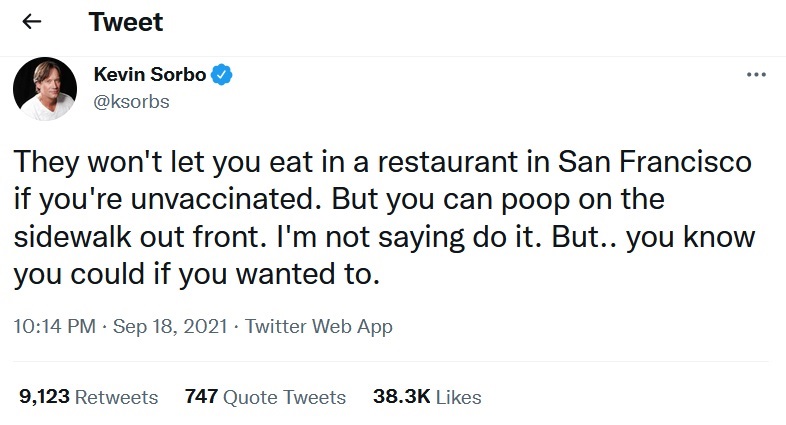 It seems he’s having a run of bad luck* on the dining out front, because on Sunday he tweeted this.

Don’t feel too bad for him – we hear New York has some great street food.

These people certainly didn’t waste any sympathy over his plight.

Voting is a right guaranteed by the constitution. Eating at a restaurant is a privilege provided by one private citizen to another, not from the government.

But ya know, good point.

Maybe they recognize you.

Don’t worry, just keep applying. Eventually one of the restaurants will hire you.

It's tougher than a Trump Steak to vote in Texas thanks to Republicans like Kevin Sorbo. https://t.co/RZaA8h8BQs

It’s hard for selfish, inconsiderate, potentially life-threatening antivaxxers to get a table at a restaurant. Sounds like the system is working to me, @ksorbs. https://t.co/qtWOurAxf1

Thanks to folks like you, it’s even harder to get into many emergency rooms. https://t.co/G7V3MmC1QR

Plenty of space in a theater showing a Kevin Sorbo movie https://t.co/Wt3bn6vk83

Kevin Sorbo is what happens when Scott Baio tries steroids, hangs out with James Woods, gets career advice from Dean Cain, and moves in with Jon Voight.

Which American Amendment do you think guarantees the right to dine while contagious?

It is easier for a camel to pass through the eye of a needle than for Kevin Sorbo to get a table in NYC, apparently. 😃

I always get Kevin Sorbo confused with Scott Baio. Which one is the washed-up racist white male actor who only exists for us to dunk on him?

Of course, there is an answer to Mr Sorbo’s Herculean problem.

I don't have that problem, I am vaccinated. https://t.co/6SKtsWpmzl