It’s usually a slow news period in the couple of weeks after Christmas and New Year, largely due to parliament being on recess.

Covid-19 put a stop to that, with all the speculation and half-hearted announcements about whether the rules will change and why they definitely won’t – right up until they do.

But one news item which looks a lot like the scraping of a barrel has got people shaking their heads – and potentially messing their hair. And before you point it out – we know we’re writing about it too. Pot. Kettle. Blah, blah, blah. 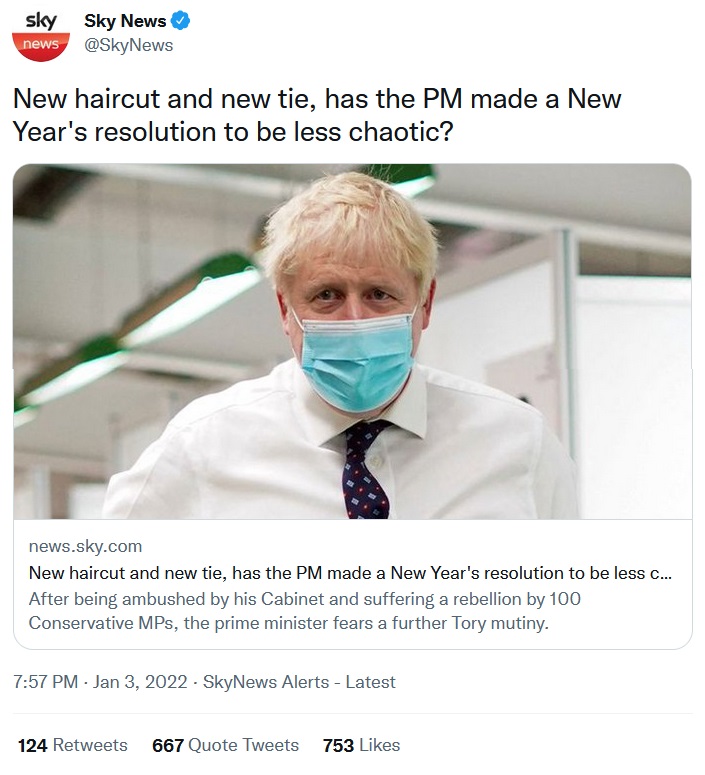 “Any headline that ends in a question mark can be answered by the word no.”

My New Year resolution is to not change at all but get a haircut to fool people into thinking I'm no longer a shambolic walking haystack. pic.twitter.com/iG09GvqRE8

Could we set the bar for the leader of our country slightly higher than that of a 12-year-old on his first day at school? Because the answer to this question is clearly 'no'. https://t.co/J8i5cfkrYT

Maybe, but I recall that roughly once a month for four years some overpaid Charlie Brown at the New York Times or similar would attempt to kick the Lucy's football of writing:

I give it a week https://t.co/ijCXoipk19

This is like when there'd been 200 Bullseye episodes or something and Jim said, Let's have a look at what we looked like way back in 1981, and they played the clip and he looked The Same. https://t.co/IinzqugQO5

New haircut and new tie, has PM Boris Johnson made a new years resolution to be less chaotic? pic.twitter.com/2V7UN41nJl

Not based on his actions, words or policies, but hey ho, new haircut. https://t.co/JsoVEg3Puf

If recent history has taught us anything …oh, hang on – it hasn’t.