Not everyone thinks the British honours system is fit for purpose, with objections ranging from the references to the British Empire to whether everyone who gets an honour actually deserves it. 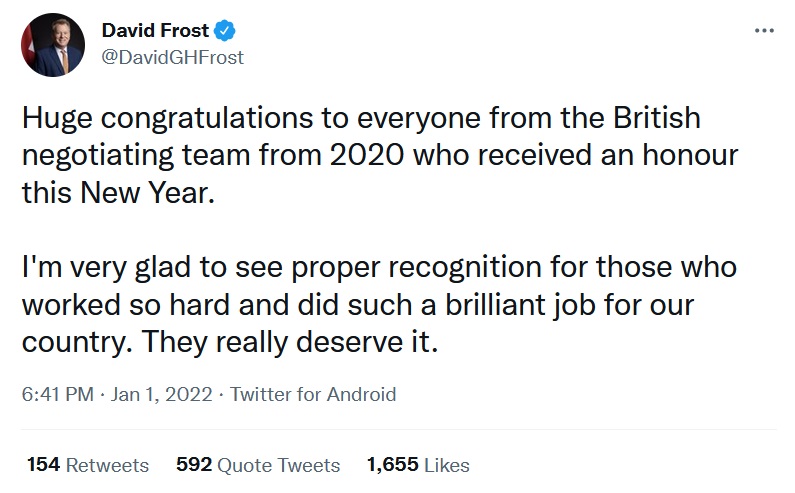 This is the same Lord Frost who has devoted his recent life to complaining about the Brexit deal negotiated by that team – and himself.

The responses made a lot more sense than the tweet.

Hey everyone, I just spent a year telling you the brilliant agreement I negotiated is actually dogshit, and then resigned because its obvious there's no solution to the problem I caused.

Can me and all my enablers please have a medal, a chocolate mouse, and some balloons? https://t.co/rHQTYBmD0J

Congratulations to everyone involved in doing twice as much damage to the economy as the pandemic!

Already strong candidate for the 2022 Comedy Tweet of the Year!

Taking the piss to the end !

Since when has hamstringing UK businesses been a brilliant job?

I’m a florist from today every STEM of flowers needs a plant passport and photo sanitary certificate to enter the UK, how can you be proud of this???

From the man who ran away screaming having thrown his toys out of the pram ….sit down and be quiet you ridiculous, inept, coward

We hope this response from @Paper_Polly cleared up Sir David’s confusion.

It’s the first of January, not April.