A Conservative MP has gone viral with a short-lived Twitter rant at chief medical officer Chris Whitty, describing him as an ‘unelected spokesperson’ in a ‘socialist state’.

Joy Morrissey, who is also a parliamentary private secretary to the Foreign Office, appeared unimpressed with Whitty’s recommendation that people be cautious with their socialising in the run-up to Christmas because of Omicron.

Here’s what she had to say (in a since deleted tweet). 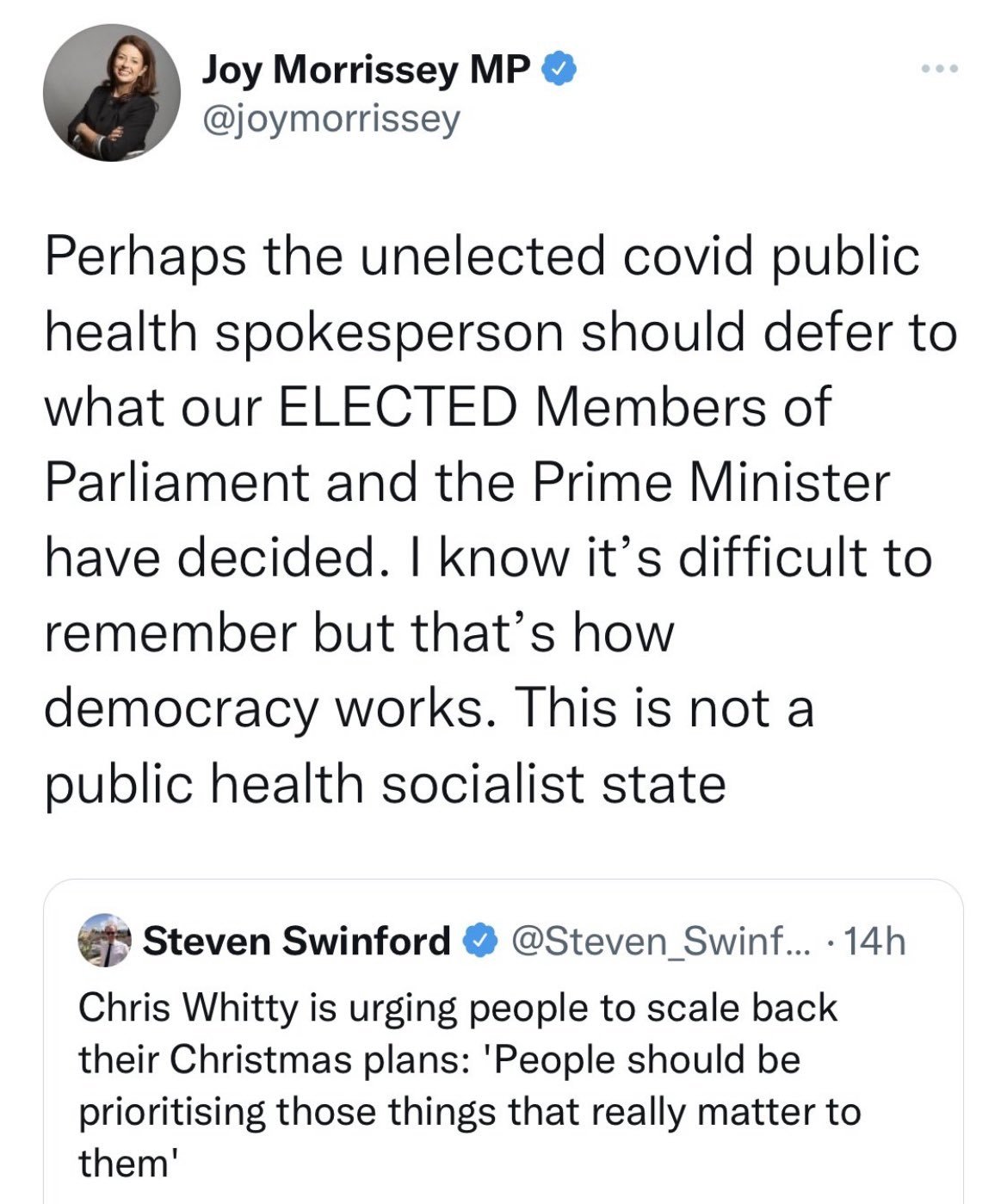 And these are surely the only 9 responses you need.

You may not *like* what the science leads public health experts to recommend.

You may even think it’s just fine to attack @CMO_England in the middle of a global pandemic.

But surely you’re not actually suggesting he can’t offer a public opinion?

H. Joy Morrissey , do you consult your MP or your GP if you get Covid ? pic.twitter.com/zSr1XVLJKN

Conservative MP openly criticising the Chief Medical Officer of England during a pandemic. Also (unintentionally) reveals that the government has failed to “follow the science” pic.twitter.com/7mleXedE33

It's a really helpful insight into the 'minds' of politicians still high on the idea that a majority of votes cast or the 'will of the people' can somehow overcome the force of irrefutable facts. https://t.co/kr2A8XDNR5

Joy Morrissey's preferred scenario, now deleted, in which senior public health officials are not able to speak freely, or diverge whatsoever from the government line, would surely be incredibly… undemocratic?

Joy Morrissey MP will be furious when she hears this unelected Head of State is wisely deciding to social distance https://t.co/86Jej0RaRz

Morrissey later had another go.

I am increasingly concerned at public health pronouncements made in the media that already seem to exceed or contradict decisions made by our elected representatives.

Expert advice is important but decisions must be made by those we elect, who are democratically accountable.

But people weren’t forgetting (or any more convinced).

Why did you delete this version? pic.twitter.com/3J1wPMlIf6

Health advice from a PM who studied Greek poetry and got fired twice for lying: GOOD ✅

How can elected representatives be held accountable for ignoring scientific advice from their scientists advisers if you’ve banned the scientific advisers from speaking?
And this tweet is offered as an ‘improvement’ on the deleted one… https://t.co/GO0ke5yui8

Just in case the Beaconsfield MP is still in any doubt ..

his job is to present the scientific view and what’s best for public health, not repeat what Boris Johnson said because he can’t keep his own MPs on board with basic health measures