The days when the release of the John Lewis Christmas ad was the commercial event of the season are long gone, because the funny, tear-jerking or controversial ad field is a very crowded one.

Tesco giving Santa a covid passport so he can make all his deliveries.

Aldi getting Ebanana Scrooge to be more like Marcus Radishford and help people.

Racists getting riled because a black family featured in John Lewis’s ET-alike message of reaching out.

Enter Posten, Norway’s postal service, which has released a Christmas advert that both promotes what they do and celebrates the upcoming 50th anniversary of the decriminalisation of same-sex relationships in their country.

Harry, played by Johan Ehn, locks eyes with Terje Strømdahl‘s Santa one year, and the chemistry is obvious, but the pair only get to see each other on successive Christmas Eves.

Growing increasingly desperate to see more of him, Harry writes a letter to Santa and – with Posten’s help – he gets what he asked for. He must have been on the good list.

The ad, created by Norwegian agency POL and entitled When Harry Met Santa, might just bring a tear to your eye.

The real-life husband of ‘Harry’, author Mats Strandberg, is obviously very proud of his other half’s role in the heartwarming advert.

YOU HAVE TO WATCH THIS! Norweigan post office, @postennorge, has done an amazing Christmas campaign to celebrate that in 2022 it's 50 yrs ago that homosexuality was decriminalized in Norway. It's an amazing short film, featuring my husband Johan Ehn. https://t.co/6O3bP2xK9H

The mini romcom got a resounding thumbs up from many people, who posted comments like these.

Ok I’m breaking my no Xmas before December rule to thank Posten Norge for this strong and moving message of inclusion celebrating 50 years since the decriminalization of homosexuality in Norway. https://t.co/Sl7StxQ6Gm

dont talk to me unless its about posten norge’s gay christmas ad pic.twitter.com/N3qQgL7aFO

The Norwegian postel system has released their Christmas ad, it's my favourite and well, my eyes have been leaking since I've watched it. I love you Norway. @postennorge ❤️ #LoveIsLove #Christmashttps://t.co/ty4pEU6wEB

Talk Radio, which hosts Julia Hartley-Brewer, James Whale and Jeremy Kyle, amongst others, tweeted this.

What do you think? pic.twitter.com/8BQWUzlpNO

No prizes for predicting the kinds of responses they got. 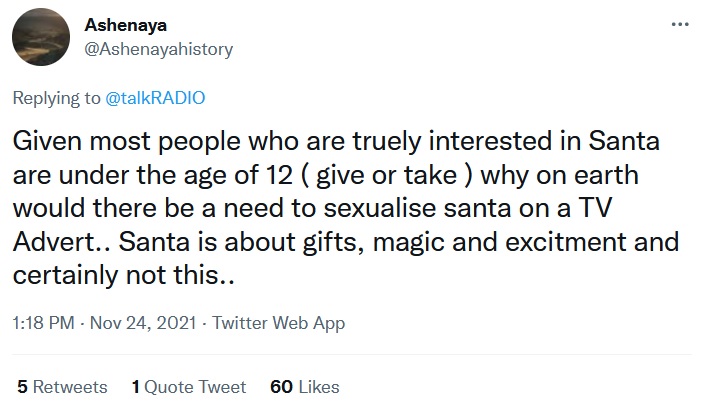 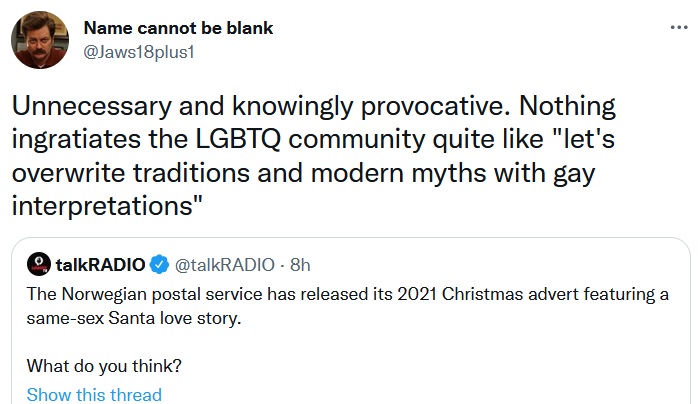 People jumped to its defence.

This: "WhY aRe U sExUaLiSiNg SaNtA"

The Norwegian ad that a section of Twitter is losing its mind over is a simple cute story where a lonely guy and Santa are in love but can only see each other once a year coz Santa is so busy so he gets the post office to help so they can be together.

I think for a bunch of people who talk about how everyone is triggered by everything, their cake melting in a downpour reaction to seeing two men kiss is FUCKING HILARIOUS 🤣🤣🤣🤣 https://t.co/rbllUb9RUN

People getting the hump about this is hilarious. It’s an advert about a fictional character ffs 😂 and it’s done by them to recognise 50 years since it was legal to be gay.
Get a grip. https://t.co/pce9B2kZIZ

Talk radio listeners losing their shit over a fictional Christmas character being portrayed as gay in a Norwegian Christmas advert.
Imagine having such a great life that this is the kind of crap you care about. https://t.co/g0a8Je9AE7

Needless to say, all the usual dickheads are doing their nuts over this.

If you think the existence of a Mr Claus is ‘sexualising Santa’, but have never made the same argument about Mrs Claus, guess what?

Ah come on Santa is meant to be an innocent story of a old man who breaks into strangers houses while they're asleep and lavishes their children with gifts, after watching their every move all year