In the first of an occasional series, awful boss of the week is surely this one, who put up a notice to tell liberals not to apply because, well, you’d better have a read for yourself.

‘I bet it’s posted right next to a sign complaining that no one wants to work anymore,’ said EggsAndMilquetoast who shared it over on Reddit. 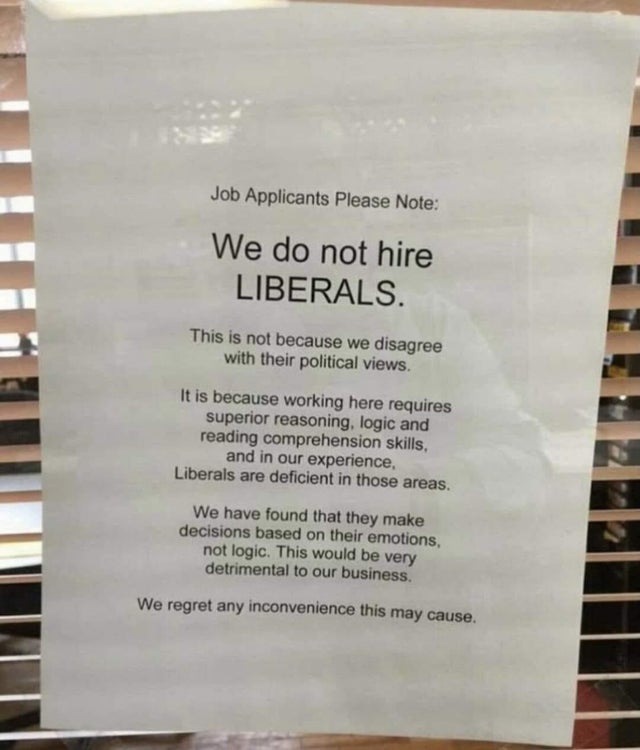 We do not hire LIBERALS.

This is not because we disagree with their political views.

It is because working here requires superior reasoning, logic and reading comprehension skills, and in our experience, liberals are deficient in those areas.

We have found that they make decisions based on their emotions, not logic. This would be very detrimental to our business.

We regret any inconvenience this may cause.

And it got entirely the level of mockery you’d hope it would.

‘Posting this sign is an extremely emotional thing to do.’
BeMancini

‘Maybe it is for the better. You know what kind of person your boss would be.
Bullet dodged.’
dragonager1

‘Oh absolutely. This whole sign feels like coded language for “we’ll find any excuse to commit wage theft” and “oh you’re sick and can’t come to work? Fuck you!”
EggsAndMilquetoast

“They make decisions based on their emotions” – We, on the other hand, share our emotions in passive-aggressive notes posted on the wall …’
shankworks

·
15h
Says liberals are too emotional. Gets triggered by Big Bird.

“We regret any inconvenience this may cause”.

‘Bro, you just eliminated a shit ton of applicants because you were honest about your shitty hiring practices. The only person you inconvenienced is yourself.’
SuperKamiGuru824

‘The irony is not lost on me that these same people who proclaim facts over feelings don’t even believe in actual facts or science or reason or logic or anything else.’
w3are138

People wondered if it’s a legal thing to discriminate like this and apparently it is, according to this person.

‘I think it actually IS legal in the US, at least on a federal level.

‘Nothing about political affiliation.’
EggsAndMilquetoast

‘So you could be refused a job based on your voting preference? That’s insane.’
L3n777

‘Your vote is secret, but if your car has a Bernie sticker on it you won’t get the job.

‘Personally I would apply to this job and torch liberals throughout the interview so I’d get hired, then try to unionize the staff.’
P0Rt1ng4Duty