The takedown of this body shaming comment was simply delicious

Everyone loves a good comeback and this one is simply delicious.

It’s a Facebook exchange which began when this guy asked for recommendations for a book of low calorie recipes.

A ‘friend’ replied with what appears to be an attempt at humour that was missing one vital ingredient – anyone else laughing.

“Take several seats.’ said th3adm1n1strat0r who shared it over on Reddit. And it’s quite the riposte. 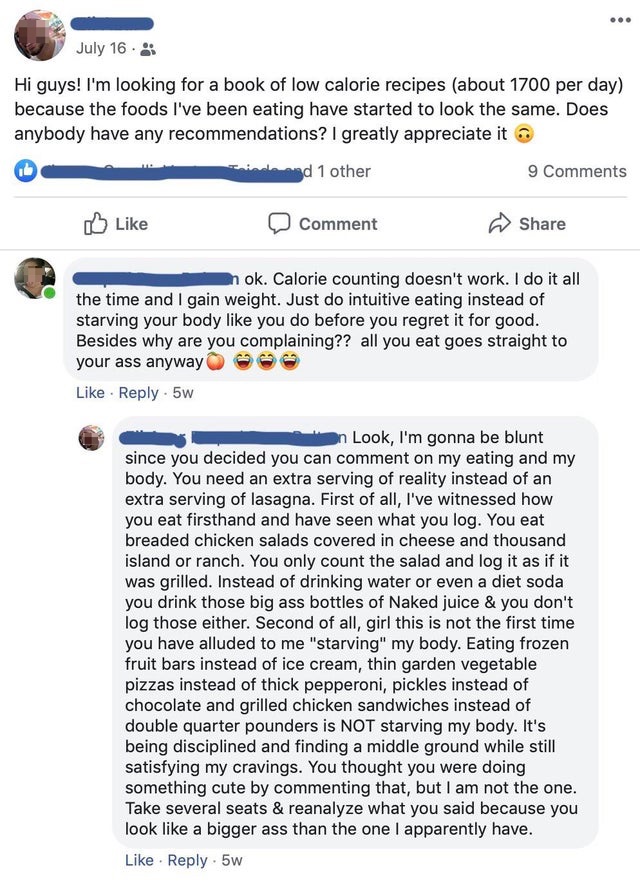 ‘Hi guys! I’m looking for a book of low calorie recipes (about 1,700 per day) because the foods I’ve been eating have started to look the same. Does anybody have any recommendations? I greatly appreciate it.’

‘Ok. Calorie counting doesn’t work. I do it all the time and I gain weight. Just do intuitive eating instead of starving your body like you do before you regret it for good. Besides, why are you complaining? All you eat goes straight to your ass anyway.’

‘First of all, I’ve witnessed how you eat firsthand and have seen what you log. You eat breaded chicken salads covered in cheese and thousand island or ranch. You only count the salad and log it as if it was grilled. Instead of drinking water or even a diet soda you drink those big ass bottles of Naked juice and you don’t log those either.

‘Second of all, girl this is not the first time you have alluded to me ‘starving’ my body. Eating frozen fruit bars instead of ice cream, thin garden vegetable pizzas instead of thick pepperoni, pickles instead of chocolate and grilled chicken sandwiches instead of double quarter pounders is NOT staving my body. It’s being disciplined and finding a middle ground while still satisfying my cravings.

‘You thought you were doing something cute by commenting that, but I am not the one. Take several seats and reanalyse what you said because you look like a bigger ass than the one I apparently have.’

And here are just a few of the comments it prompted on the subReddit ‘clever comebacks’.

‘Take several seats was the beautiful cherry on the top (bottom?) of this comment.’
Pliskkenn_D

‘Most of the murders here are quick jabs with a stiletto to the neck. This post is a pummeling with a sledgehammer. It’s not quick, but its thorough.’
redtimmy

“You look like a bigger ass than the one I apparently have” has now become my favorite quote from here.’
Im_your_life

‘Girl be eating herself after that roast.’
DreamPolice-_-_

‘One of the greatest letters ever written’