There has been a lot of concern about the Queen’s health after the 95-year-old had a hospital visit resulting in being told to rest, followed by a back strain that caused her to miss the Remembrance Day services.

I think there is something going on with The Queen, I’d wager that she’s generally very unwell.

Fears were raised further by Boris Johnson’s personal assurances that she was well.

PM says he saw the Queen for an audience this week and she is “very well”. “I want to reassure people”, he says, after Her Majesty pulled out of today’s Remembrance ceremony due to a sprained back.

It was then announced that the Queen would rest for the next few weeks, before considering carrying out public engagements. 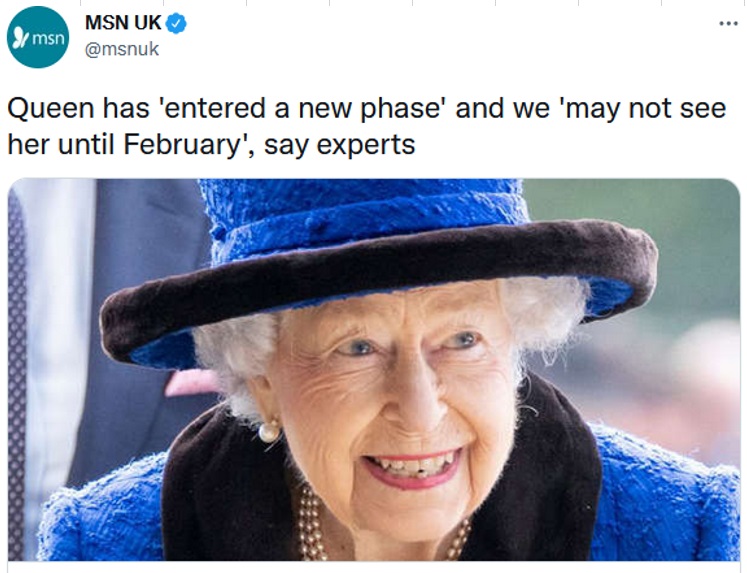 The interesting choice of words sent Twitter into overdrive, and the results were unmissable.

is the Queen… a bear? pic.twitter.com/LcW0TkNjE6

Experts also advised people not to approach the Queen during those early weeks in February, as she will be emaciated after months of hibernation and aggressive as she hunts for food. pic.twitter.com/2bAWBBjU2l

I know a lot of you think she's dead, but I reckon she cut herself a bad fringe and is waiting for it to grow out. https://t.co/s4ZrVCMZt3

Is… is the Queen a caterpillar? pic.twitter.com/F4ayV6Jgkp

Why are they talking about her like she’s a fucking Pokémon pic.twitter.com/JYZMVu5w6q

Again, I am no comms expert but I am cackling at the idea that "The Queen has entered a new phase" was the least creepy thing they came up with.

BOSS: it's been almost six months, where have you been

ME: uh, I was entering a new phase https://t.co/v25ksKlIGm

[through a megaphone as i drive around the neighborhood] THE QUEEN HAS ENTERED A NEW PHASE. PLEASE STAY INSIDE https://t.co/8slrDmr7Fx

it’s too late but i should have used this phrasing when i had top surgery and had to take three weeks off work https://t.co/3aSnonYoiz

Just let the woman shed her tail in private. pic.twitter.com/XGIvU9623e

I bet they’re Bionic-Womaning the Queen

That ought to make the government think twice before lying to her again.

People are trying to guess what’s in the Queen’s handbag? Our 17 favourites