Covidiot takedown of the day

Latest in an occasional series, covidiot takedown of the day goes to this, shared by Redditor Doozenburg who said: ‘Over My Dead Body!’ 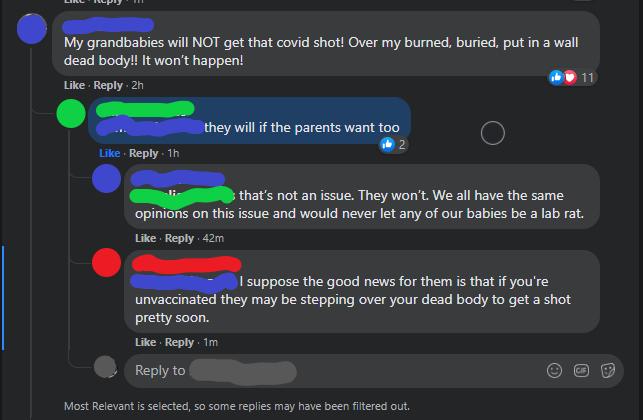 ‘My grand babies will NOT get that covid shot! Over my burned, buried, put in a wall dead body!! It won’t happen!’

‘They will if the parents want too.’

‘That’s not an issue. They won’t. We all have the same opinions on this issue and would never let any of our babies be a lab rat.’

‘I suppose the good news for them is that if you’re unvaccinated they may be stepping over your dead body to get a shot pretty soon.’

‘This has serious “Man burned alive after refusing to leave active volcano” vibes. Its be great if they didnt act as kindling for others and then run screaming to other spreading the flame.’
DontBeHumanTrash

‘Lol, these “hardass” anti-vac types who puff up and spout off is like a Simpsons-esque baby translator of a toddler at the doctor’s office.

“Lavish attention on me and entertain me.”
Davencrusher

‘Congratulations! If you aren’t vaccinated, you’re the control group. You’re still a lab rat, just the one more likely to end up dead.’
Alert-Potato

Talking of anti-vaxxer takesdowns – and just in case you haven’t seen it (or want to enjoy it again) – this TikTok riposte from earlier in the week is A++.