In this week’s episode of ‘Ted Cruz gets schooled on Twitter’, the Texan senator has been offering up his thoughts on Australia’s tough (and very successful) anti-Covid policies.

Cruz shared a clip of Australia’s Northern Territory chief minister Michael Gunner announcing a wide-ranging vaccine mandate with a tough penalty for workers who did not comply.

I love the Aussies. Their history of rugged independence is legendary; I’ve always said Australia is the Texas of the Pacific.

The Covid tyranny of their current government is disgraceful & sad.

I stand with the people of #Australia https://t.co/9elCF0KRA3

Cruz, as you might well be aware already, is no fan of vaccine mandates, in Australia or anywhere else.

And this response from the chief minister himself went wildly viral because it was just so good.

G’day from Down Under @tedcruz. Thanks for your interest in the Territory. I’m the Chief Minister. Below are a few facts about COVID down here. https://t.co/cGFwBP7Nqx pic.twitter.com/mGNyOxlN41

Here’s that statement in full. 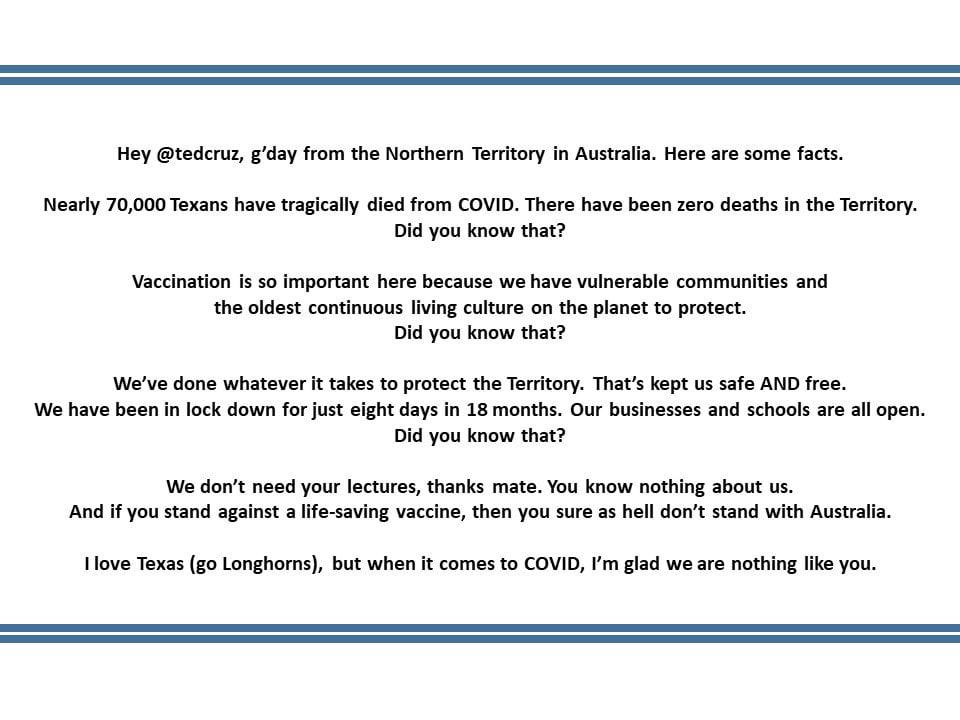 And just in case it’s tricky to read …

‘Hey @tedcruz, g’day from the Northern Territory in Australia. Here are some facts.

‘Nearly 70,000 Texans have tragically died from Covid. There have been zero deaths in the Territory. Did you know that?

‘Vaccination is so important her because we have vulnerable communities and the oldest continuous living culture on the planet to protect. Did you know that?

‘We’ve done whatever it takes to protect the Territory. That’s kept us safe AND free. We have been in lock down for just eight days in 18 months. Our businesses and schools are all open. Did you know that?

‘We don’t need your lectures, thanks mate. You know nothing about us. And if you stand against a life-saving vaccine, then you sure as hell don’t stand with Australia.

I love Texas (go Longhorns) but when it comes to COVID, I’m glad we are nothing like you.’

Here are just a few of the things people were saying about it.

Wow, can someone check in on Ted? This is the best burn I’ve ever seen!

This is how you tell Ted Cruz to fuck off in Australian, courtesy of @fanniebay, Northern Territory Chief Minister. pic.twitter.com/22WikXpG5G

Whack. Straight back over the bowlers head for six.

Nothing says Good Morning like @tedcruz getting demolished by Michael Gunner, the Chief Minister for the Northern Territory, Australia. pic.twitter.com/z6MZ0YvChB

Thank you for this! I live in Texas and deeply dislike and mistrust Sen Cruz’s motives. His attempts to gain political favor with rhetoric and no facts is distasteful.

COVID & the vaccine has deeply divided my state and the death toll is a preventable tragedy. Cruz is at fault.

Echoing sentiments shared by billions of people around the world, an Aussie politely tells Ted Cruz to f— off. https://t.co/tiV9QwIF1l

American’s talk about the freedom to kill

Australian’s talk about freedom not to be killed

I saw “Ted Cruz” and “dead body” in the same tweet and thought he finally confessed to being the zodiac killer.

Dunking on Ted Cruz has become an international sport. https://t.co/tShSpFGvO5