Republican congressional hopeful Lavern Spicer has gone wildly viral on Twitter although not – presumably – for reasons she would have wanted.

Spicer – who will stand for Congress in Florida in 2024 – spoke out after basketball star Kyrie Irving was dropped by the Brooklyn Nets because he’s not vaccinated.

Under a New York mandate, professional athletes have to be vaccinated against Covid-19 to play for a team in the city or practise in public venues.

Spicer wants to ban vaccine mandates but her tweet wasn’t the slam-dunk she thought it was. Quite the opposite, in fact. 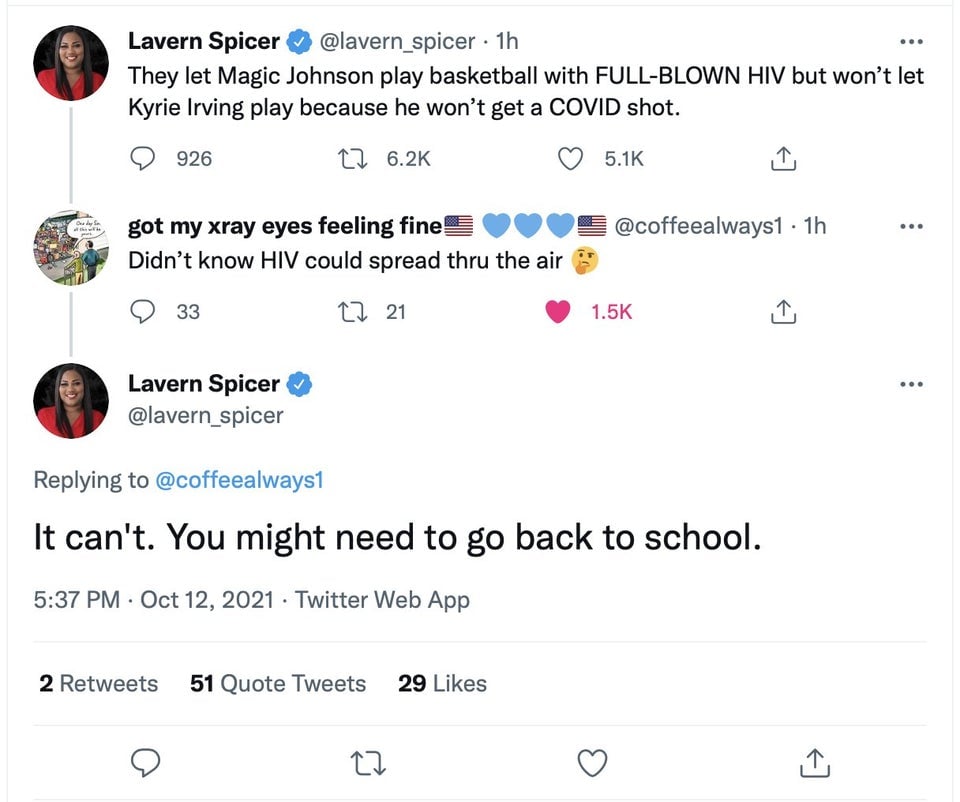 And here’s the exchange again, just in case that’s tricky to read.

@lavern_spier: ‘They let Magic Johnson play basket with FULL-BLOWN HIV but won’t let Kyrie Irving play because he won’t get a COVID shot.’

@coffeealways1: ‘Didn’t know HIV could spread thru the air.’

@lavern_spicer: ‘It can’t. You might need to go back to school.’

So close – and yet so far – it certainly appears that someone might benefit from going back to school.

And here are just some of the many responses it prompted.

I pray for the people who educated you…I know they embarrassed https://t.co/GQh0MHTyyc

Pure ignorance aside, what is “Full Blown HIV?” Is there some way you could only have a whisper of it?

A velveteen touch of HIV

“We’re just playing basketball. It’s not like we’re going out to have unprotected sex with Magic.”

Worst take in the entire history of takes… https://t.co/epYmc5NXDl

How does HIV spread? Asking for Lavern Spicer. pic.twitter.com/OpwCRxhW3l