Early contender for facepalm of the week is this, an unusual – at least, we think it’s unusual – take on exactly how big an engagement ring is big enough.

It went viral after it was shared by Redditor Infinite-Furiosa who said: ‘Ah, that premarital third eye. 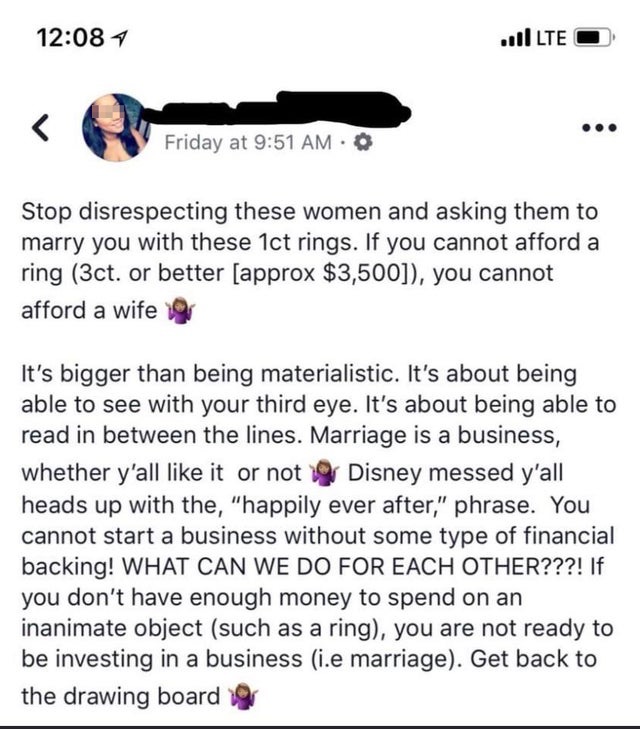 It got no end of mockery, as you might expect …

‘Its biggger than being materialistic … it’s a business!
hmmm.’
Duck_Burger

‘So the best way to start a business is to waste thousands of dollars on something worth a few hundred dollars.’
traws06

‘That does not generate revenue and has near zero resale value.’
M_Mich

‘And can easily get lost or stolen…’
vandriff

… with a side order of fact checking.

‘I am not sure where she is getting $3.5k for a 3 ct ring unless the quality of the diamond is sh-t. Diamonds direct has a 3 ct diamond for $15k. Just the diamond, not even a ring.’
fluffandstuff1983

But mostly it was full of people saying stuff like this.

‘If you think like this you don’t deserve a ring at any price.’
D00fenshmirtzEvilInc

‘My third eye tells me, its bad business to marry someone like her, adter all, whats the net profit of that transaction?.’
ThatOneSadhuman

17 hilariously entitled brides to have you hollering into next week