Brexiters are falling over themselves to try and convince the public that Brexit has nothing to do with the shortage of HGV drivers, despite the fact that the government’s response is to offer short-term visas to *checks notes* EU-based HGV drivers.

Things that cannot simultaneously be true:
1) There is a Europe-wide HGV driver shortage and EU drivers can have their pick of jobs.
2) EU HGV drivers are so desperate for jobs that they will drop everything and relocate for a work visa with a deportation date in 4 months. 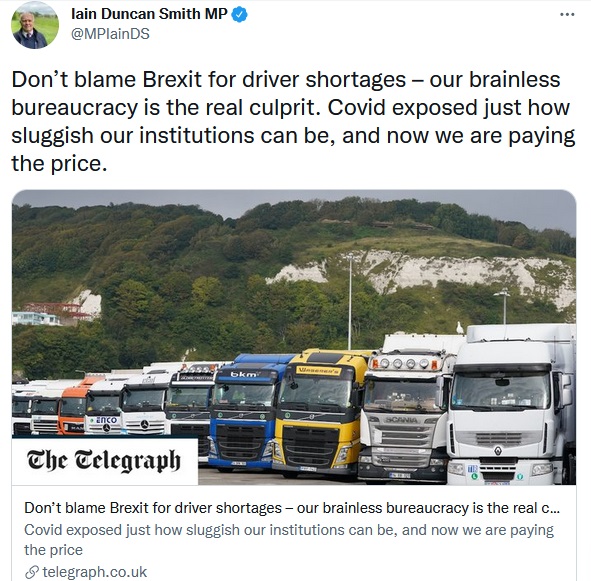 As the article is behind a paywall, this update from Theo Usherwood adds some flesh to the bones.

Former Tory leader Sir Iain Duncan Smith says the road haulage industry is "trying to dodge the bullet" when it comes to blame for the current crisis.

"It's easy for the industry to scream and shout now but they knew even in the run up to Brexit they had a shortage."

They literally dismissed *all* the warnings and called it 'Project Fear'. https://t.co/rrQuJUDdIU

As the government issues visas for foreign drivers to try to address the issue, it’s a mystery what made the bureaucracy of foreign workers coming here easier… a mystery I tell you…🤷‍♀️ https://t.co/GIlokxnBgW

The Express is now one step from calling their mummy pic.twitter.com/ez6yIZ1d4G

"The idea that somehow the British people were misinformed about Brexit is absolute nonsense" ~ Iain Duncan Smith pic.twitter.com/Eqr9wn2s4E

I see the people are letting Brexit down and Iain Duncan Smith is jolly cross with them.

Iain Duncan Smith is claiming that the current shitshow is nothing to do with Brexit.

With similar logic, the young dog seems to be claiming that the big pile of shit on the kitchen floor is nothing to do with him. #BrexitHasFailed pic.twitter.com/wgL52OmaO6

so at least half the petrol stations in the country are out of petrol, the army’s being sent in to deploy fuel, but it’s not a crisis of the government’s own making pic.twitter.com/EIWFOPLK9k

28 countries. 1 in chaos. The Quiet Man says it’s the virus done it. https://t.co/C9sZPEcltS

My "Don't Blame Brexit For Driver Shortages" Ian Duncan Smith quote banner headline in the Express has a lot of people asking questions answered by my headline.

As long as Iain Duncan Smith is treated as an authority on anything except dishonest CV’s & fake testimonials, the country will continue to punch itself in the face on a daily basis.