Hot on the heels of the UK home energy infrastructure coming under pressure from rising natural gas prices, causing the collapse of some providers, a new gas problem has reared its head – chaotic petrol distribution.

Contingency plans would kick in if the situation gets much worse, as several petrol station operators have had to close a small number of stores due to lack of fuel

I promised that after Brexit we would "prosper and flourish and thrive as never before".
By which I meant there would be no petrol, empty shelves in supermarkets, crops rotting in fields and rocketing gas prices. #BrexitHasFailed#petrolshortage pic.twitter.com/NnOcCUq0du

What began as a handful of BP stations closing due to a failure of the supply chain, itself caused by the 90-100,000 shortfall in HGV drivers in the UK, was ramped up into a full-blown crisis when ministers instructed people not to panic-buy petrol.

oh no they’ve urged people not to panic buy

In news that surprised nobody, people panicked, pushing the fragile distribution system off a cliff.

I just panic bought some petrol. Like really panicked. I haven't even got a car.

The phrase ‘perfect storm’ is doing some seriously heavy lifting right now, but the shortage of drivers at the heart of both this problem and empty shelves in supermarkets has been attributed to several factors –

The average age of drivers being too high, leading to mass retirements

The pandemic, including furlough

That last one has been repeatedly denied by Brexiters, who were also quick to point out that there isn’t a shortage of petrol. 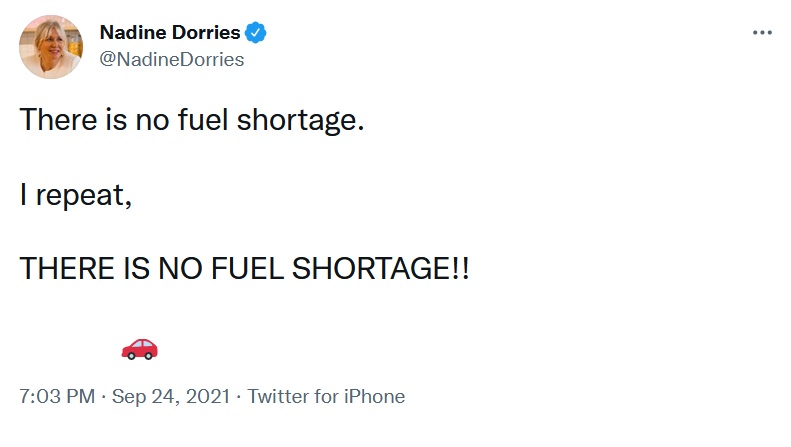 Or, to put it another way –

People were completely convinced, and the panic is over now. Oh, wait – no, they weren’t.

‘I’ve told you before, there is no fuel shortage 🚗’ pic.twitter.com/UeaviZS4zJ

James Cleverly, the only person more misnamed than me! pic.twitter.com/lG57GpdHFT

"There's loads of fuel and everyone queuing up and filling their tanks is an idiot" is a great way to pass the blame on to individuals rather than the system that allowed this to happen.

if you're wheeling Nadine Dorries out to try and calm a situation it's definitely time to run for the hills https://t.co/5LMyO7FzWA