Latest in an occasional series, newspaper letter of the day goes to this, shared on Twitter by @WalterLapp who said: ‘An excellent letter to the editor of a newspaper.’

And it went viral because it’s the perfect response to covidiots everywhere.

An excellent letter to the editor of a newspaper. pic.twitter.com/ymQEUk5VbZ

Here it is in full. 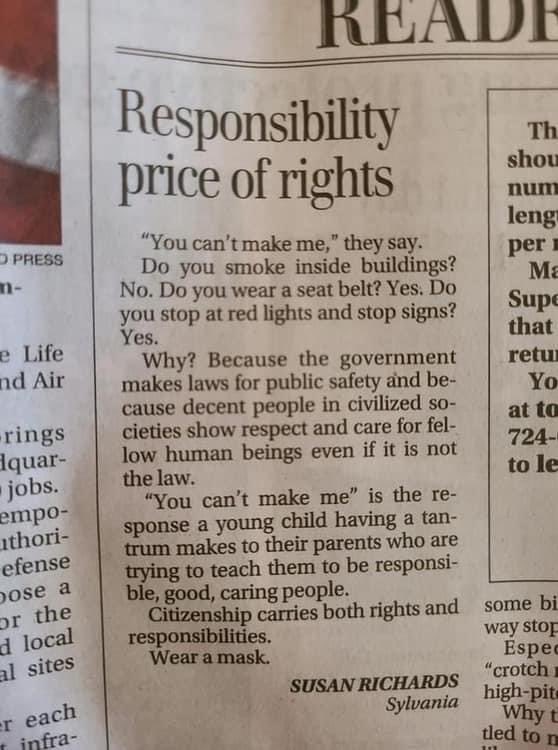 Do you smoke inside buildings? No. Do you wear a seat belt? Yes. Do you stop at red lights and stop signs? Yes.

Why? Because the government makes laws for public safety and because decent people in civilised societies show respect and care for fellow human beings even if it is not the law.

‘You can’t make me’ is the response a young child having a tantrum makes to their parents who are trying to teach them to be responsible, good, caring people.

Citizenship carries both rights and responsibilities.

And here are a few of the things people said in response.

And the reason there are rules and laws is because humans suck at self-regulation as do Corporations. And the reason penalties are typically monetary is because these “you can’t make me” types still don’t get it until it costs.

It is awful to think people have to be told this, especially so called “patriots”

Nigella Lawson had the best response to this ‘demonic entity’ troll